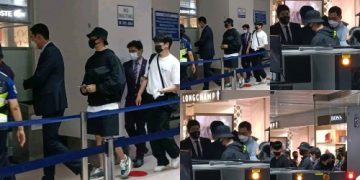 Before that, he went to Manila Philippines and received a warm welcome from thousands of fans, even if he works, he also spends time relaxing and playing golf in Manila.

Idk if its my camera or the lighting but most of the videos I took, soohyun was literally shining brightly on stage 😭🤣#KIMSOOHYUNxBENCH #KimSooHyun #김수현 pic.twitter.com/0Fn9dsblJK