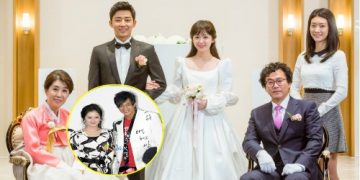 Knet predicts that the list of stars stretching from Kim Nam Gil,Jang Hyuk,Park Bo Gum, Peter Ho … will be present at the wedding of Jang Nara.

On the morning of June 3, Joy News 24 reported that singer and actress Jang Nara became a bride in June. Jang Nara’s husband is a non-entertainer, he is 6 years younger than her. Accordingly, the actress dated her husband for two years, before getting married. She shared: “I love his smile, sincerity and kind heart”.

Jang Nara is a famous A-list actress who is close to many famous Kbiz and Cbiz stars such as Kim Nam Gil, Jang Hyuk, Park Bo Gum,…
Let’s take a look at the list of guests predicted by netizens to attend Jang Nara’s wedding:

Park Bo Gum and Jang Nara are famous for being close since the two worked together in I Remember You (2015).
The two maintain a close relationship even in real life when they often visit and support each other’s movies.
Not only that, in 2017, Park Bo Gum and Jang Nara were entangled in dating rumors because of their closeness in real life. However, Jang Nara was quick to deny those rumors.
Many fans believe that Park Bo Gum will be present on the wedding day of his close senior.

Jang Nara and Jang Hyuk are extremely loved by fans through their two collaborations in ‘Successful Story of a Bright Girl’ & ‘You Are My Destiny’. The two have always kept a close relationship, especially in an interview Jang Hyuk revealed that he and Jang Nara often meet and share many things in life. Therefore, surely Jang Hyuk cannot be absent from Jang Nara’s wedding.

Jang nara is a Korean actress who has many close relationships with Chinese and Taiwanese stars. She became close with actor Peter Ho after the two had a successful collaboration in the movie My Bratty Princess, since then their friendship has always been preserved.
Many fans have also made predictions that Peter Ho will attend the wedding of his Korean best friend.