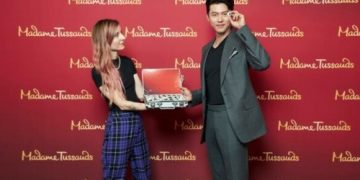 Hyun Bin’s appearance after getting married continues to be a topic of discussion among fans.

Recently, through the celebrity wax museum’s Instagram page, Hyun Bin sent an official greeting to a large number of fans with a 30-second clip.

SPECIAL ANNOUCEMENT 📣
Hyun Bin will soon have his very own wax figure in Madame Tussauds! 🙌

His figure will be touring around Singapore, Bangkok and Hong Kong 💖

This is the first time Hyun Bin appears in a clip as well as greets fans since the wedding of the century with his wife Son Ye Jin. In the clip, Son Ye Jin’s husband greets fans. At the same time, he revealed that he was honored to have a wax statue erected and placed at a museum in Hong Kong.

The erection of wax figures is considered one of the honors of celebrities. Because only stars with great influence and attraction can be erected statues by museums. Before Hyun Bin, there were many Korean artists who built wax figures such as: G-Dragon, Park Shin Hye, Song Seung Hun, Lee Min Ho.

Hyun Bin and Son Ye Jin officially returned to the same house with the wedding of the century that took place on March 31. After 11 days, the couple left for the US to enjoy their sweet honeymoon. But due to the great popularity after the success of “Crash Landing on You” in the US market, wherever the couple went, they were recognized by fans and took pictures and shared on social networks.