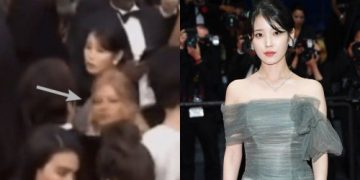 On May 27, a video clip of French beauty influencer Maria Travel bumping into IU went viral. Fans were upset seeing the influencer shoulder IU and continue to walk on as if nothing had happened, posting on the influencer’s social media about the incident.

Maria Travel has since apologized to IU and fans, explaining she had not meant to bump into the singer and actress. Netizens responded, “It’s obvious she did it on purpose,” “Don’t people from the west usually apologize right away,” “She bumped into a random Asian girl on purpose then straightened up when she saw her followers,” “Bumped into her and didn’t even look her way,” and more.

Here are netizens’ reactions:
“thats just plain rude,im sure she’s apologizing cause she found out how big IU is. but if she’s a random asian she wouldn’t bother.”

“she’s apologizing because she got caught being a jerk… I’m sure she knew 99.9% of the people there weren’t “random” folks standing around”

“This mightve been a tactic to get her name out there. I’m not defending her, what she did was rude af, but sometimes it’s all about stirring drama to get their name out, whether in a good way or bad. Though I think this was more harm then good. She doesn’t know the level of kpop fans hahaha :)”

“It’s not surprising coming from a girl who does reality TV (I don’t prefer to talk about French reality TV because they are so decadent and mind-numbing and where the candidates have an Intelligence Quotient close to nothing). I.U is a thousand times classier”

“when people make someone with no real talent popular, this is what happens”

“It’s Why I no longer watch those tv reality. I don’t know if American one are better but I prefer the korean one tho”

“No manners, No brain and sooo fake.”

“Damn, looking at the actual footage, it was rude as fuck.. clearly common decency and manners aren’t her strong suit”

“you can tell from her face, that she looks exactly like that b* that will bump into you on purpose and walk away”

“I was trying to give the benefit of the doubt when I first saw the footage, like maybe it was an accident, but after looking at it again and again… it just seemed like that “influence’s” attitude and personality ain’t that great… no common decency”

“It looked intentional… either cuz she’s racist, just plain rude and uneducated, or for clout..”

“i mean she was literally right in front of her, she could have avoided her. but just when she finds out who IU is and gets attacked for it, obviously she apologises. people are shameless these days smh”