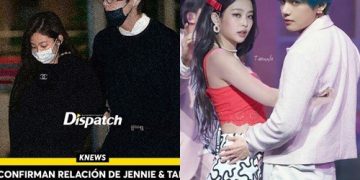 As BLACKPINK Jennie and BTS V’s dating rumor has not subsided for several days, fans come forward themselves.
On May 24th, some fans of boy group BTS issued a statement and supported the two’s love. A post titled “[Official] BTS Gallery Statement” was uploaded on the online community BTS Gallery this morning.

The author of the post said, “There have already been many opinions among long-time fans that they respect and support each member’s love. After the dating rumor, more fans left supportive messages. Gathering the majority opinion from BTS Gallery fans, this statement is issued.” 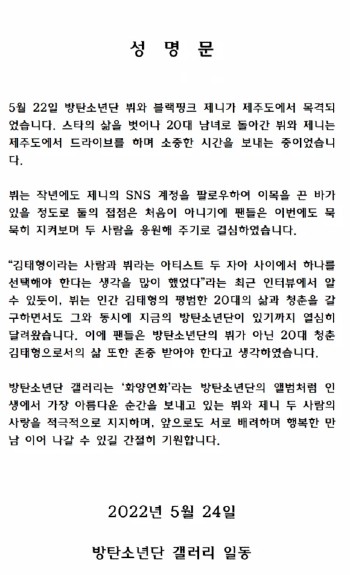 At the same time, they released a statement reflecting the opinions of “All BTS Gallery”.

They said in the statement, “On May 22nd, BTS V and BLACKPINK Jennie were spotted on Jeju Island. V and Jennie, who went back to being a man and a woman in their 20s after escaping from their star life, were spending precious time on Jeju Island.”

They continued, “Fans decided to watch silently and support the two of them. We thought that life as Kim Tae-hyung in his 20s, not as BTS V, should also be respected.”

They confessed, “We actively support the love between V and Jennie, who are having the most beautiful moment in their lives, like BTS’ album called ‘The Most Beautiful Moment in Life’.”

Finally, they added, “We sincerely hope that we can continue to be considerate and happy with each other in the future.”

As of 5 PM on the same day, about 60 comments were left on the post. Some netizens commented, “I hope both of them are happy”, “They seem to get along really well”, “ARMYs support V” and “Bless you.“

On the other hand, there were also netizens who responded, “Why do you admit even though the rumor hasn’t been confirmed? Who writes this statement on their own?”, “What do you mean ‘support’? Fans don’t support it”, “Please give me a statement of withdrawal”…

The dating rumor between Jennie and V arose when a photo was uploaded on various SNS on May 22nd. The photo was taken by a netizen. This person said, “I don’t know if they are only some lookalikes but two top idols were captured on Jeju Island.” 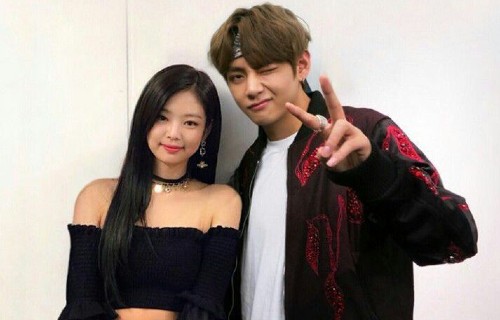 When the situation was like this, Jennie’s agency YG Entertainment and V’s agency Big Hit Music have yet to reveal any position.