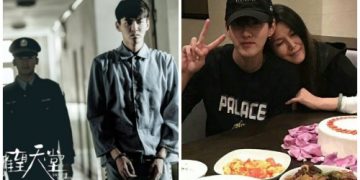 The news of new activities on Kris Wu’s SNS accounts is causing a stir in the public.
On the evening of May 21st, netizens were greatly shocked knowing several SNS accounts of Kris Wu suddenly updated new activities even though this male actor is in jail.

EXO Kris Wu has applied for bail after spending his sad 31st birthday in prison.

Many people have raised the speculation that Kris Wu has already been released and is preparing to make a comeback. There is also a suspicion of Kris Wu being allowed to use his phone in the prison.

Some people pointed out that these changes, deletions, and activities might have been made by Kris Wu’s agency since they also manage his accounts.

At the end of July 2021, the news that Kris Wu was being investigated for having sex with many underage girls received much attention. The Chinese entertainment industry was shocked when Du Meizhu, a 19-year-old girl, denounced Kris Wu for cheating on her and dating many girls at the same time.

Du Meizhu added that she and this star had sex when she was 17 years old. She also informed that Kris Wu had relationships with at least 7 under-18 girls.

Kris Wu’s scandal is considered the most serious and complicated in Chinese showbiz ever. Immediately after the scandal broke out, his partners and colleagues cut off their cooperation relationship with him to avoid being dragged into controversy. Lawyers said that the male singer could face a prison sentence of 10 years.