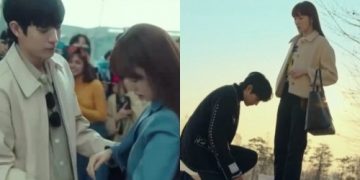 Episode 6 Shooting Stars surprised the audience when it was revealed that Oh Han Byul (Lee Sung Kyung) used to like Gong Tae Sung (Kim Young Dae) but was accidentally hurt by him. Her heart fluttered again when she was with him, but Han Byul tried to let go of that feeling and told herself: she won’t be able to work with celebrities if she starts to develop feelings.

The preview photos of episode 7 showed Han Byul and the company’s PR team enjoying a housewarming party at Do Soo Hyuk’s (Lee Jung Shin) house. Lawyer Do has just moved into a new house and at the same time becomes a neighbor with the person he doesn’t like, Gong Tae Sung. At first, the atmosphere was extremely natural and relaxed as everyone enjoyed the wine and played games.

However, both Han Byul – Tae Sung – Soo Hyuk were hesitant at the challenging question: ‘Bend your fingers if you kissed someone this week’. Besides, when staying with Han Byul in a private corner of his house, Soo Hyuk did not hesitate to express, “Having Captain Oh by his side, the scenery is also more beautiful”.

At first, Gong Tae Sung was very angry when he learned that the PR team was invited to the housewarming party and his neighbors were not invited. He surreptitiously pressed his ear against the wall to try to hear the conversation of the next-door neighbor. But right after that, it could be seen that he couldn’t stand it but appeared at the party despite the host’s lack of sympathy for him.

Not only was he annoyed when he saw Han Byul coming to Do Soo Hyuk’s housewarming party, Tae Sung was also jealous when his close brother and manager happily put his arm around Han Byul’s shoulder. Before understanding what was happening, captain Kang (Yoon Jong Hoon) was immediately pulled away by Tae Sung.

During the episode 7 trailer, Gong Tae Sung showed excessive interest in Han Byul such as bending down to tie captain Oh’s shoes, buying coffee, covering his umbrella, even exclaiming, “My heart is pounding hurry up for you’, then approached her just like that. About Han Byul, she also began to flutter, but it is not clear which guy this time when she said, “Heart flutters, his guts are as hot as fire”.

Watch the next episodes of Shooting Stars broadcast at 22:40 pm every Friday and Saturday on tvN.