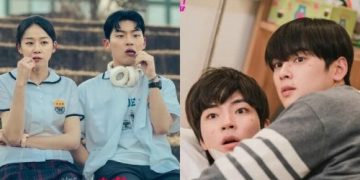 Their youthful appearance and good acting have inadvertently made viewers forget the age gap between these actors.
Appearance and the ability to role-play are two important factors that help actors perform their characters excellently. These factors also inadvertently make the audience forget the actual age of the actors. Here are some pairs of Korean actors acting as friends of the same age yet having a big age gap in real life.

In Snowdrop, Lim Soo Ho (Jung Hae In) and Joo Gyeok Chan (Kim Min Kyu) are almost the same age. These two characters when standing next to each other seem to be very similar to two same-aged, like-minded friends. But in real life, Jung Hae In is 6 years older than Kim Min Kyu, the two have an extremely close brotherly relationship.

In True Beauty, Han Seo Joon (Hwang In Yeop) and Lee Su Ho (Cha Eun Woo) are longtime best friends, both of the same age and studying in the same class. With the youthful appearance of Hwang In Yeop and the maturity of Cha Eun Woo, it is difficult for anyone to realize that the two actors are 6 years apart in age.

With a beautiful appearance, it is very easy for Park Min Young to pair up with Seo Kang Joon, who is 7 years younger than her. The two characters Mok Hae Won and Lim Eun Seob are close friends and then move on to lovers. Their chemistry and perfect visuals helped the public forget the two actors’ real age gap and immerse themselves in the drama “I’ll Go To You When The Weather Is Fine”.

Surely, Lee Na Yeon (Lee Yoo Mi) and Nam On Jo (Park Ji Hoo) have left many unforgettable impressions on the audience who love All Of Us Are Dead. Their acting skills and visual are so impressive that many people were surprised to learn that actress Park Ji Ho is only 18 years old and is 11 years younger than her “classmate” Lee Yoo Mi.