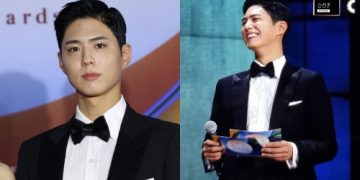 “I’m back with a healthier appearance”, Park Bo-gum expresses feelings about his comeback after military discharge, receiving a warm welcome from Suzy

Actor Park Bo-gum made his first public appearance after being discharged from the military
On May 6th, the 58th Baeksang Arts Awards was held at the 4th Hall of KINTEX in Ilsan, Goyang, Gyeonggi-do. The awards ceremony was hosted by Shin Dong-yeop, Suzy and Park Bo-gum.

Showing up in public for the first time in a while, Park Bo-gum dressed neatly in a black suit and showed off his handsome visual. Together with Shin Dong-yeop and Suzy, the actor greeted the viewers, saying, “I’m Park Bo-gum, who has returned healthily and is greeting everyone for the first time at Baeksang”.

Shin Dong-yeop said, “Suzy and I are seeing the audience again after a year, while Park Bo-gum is delivering his greeting after such a long time”. Park Bo-gum continued, “While getting back to my normal daily life, I’m here to greet the audience of Baeksang after such a long time. Looking at everyone, I realize that spring has finally come to the Korean popular culture”.

Suzy said, “We are seeing the audience again after a long time, Park Bo-gum is also seen again”. In response, Park Bo-gum expressed his feeling about making a comeback at the Baeksang Arts Awards after a long while, saying, “I’m happy to see the seniors and audiences again. I’m even happier to be here with people representing the popular culture and arts”.

Park Bo-gum hosted the Baeksang Arts Awards for three consecutive years from 2018 to 2020. On August 31st, 2020, he enlisted in the Navy and completed 20 months of his military service. He was officially discharged on the 30th of last month.