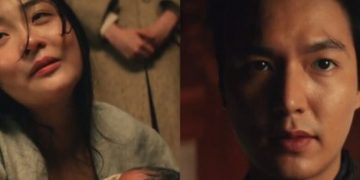 Episode 6 of “Pachinko”, which starred Kim Min Ha, Lee Min Ho…, has been aired
Recently, episode 6 of the series Pachinko aired. As we know in the previous episode, Sun Ja (Kim Min Ha) and Kyunghee helped Yoseb pay off a debt. However, he not only didn’t appreciate it, but also scolded the two because he thought they both embarrassed him.

Yoseb got angry and left home, making everyone very worried. At this moment, Sun Ja went into labor. Baek Isak was very confused, but he still had to find Yoseb. Fortunately, Sun Ja gave birth safely in the end

When Baek Isak found Yoseb while drunk and almost got into a fight with others. In fact, Yoseb is not a mean person. However, he has not come out of his family’s glorious past to accept the fact that he is also just an immigrant who is looked down upon in Japan. Yoseb also felt guilty about himself as a useless person who could do nothing.

At the tavern, Baek Isak witnessed how Japanese officers look down on Koreans but couldn’t do anything about it. This made him feel very guilty. However, Yoseb said that it was survival. Yoseb even mentioned Sun Ja and it made Baek Isak determined to tell his brother everything.

Yoseb thought that Baek Isak brought a pregnant woman into the house out of pity, but Baek Isak said that he should have died, but thanks to her, he was able to live. He also said that thanks to Sun Ja, his life has meaning. Baek Isak wanted his children to live in a better and fairer society and Sun Ja is the one who motivated him to try.

As for Koh Han Su (Lee Min Ho), for some reason, he also knew about Sun Ja giving birth and it was a boy. Han Su didn’t mind telling this to his current wife and told her that she had no obligation to be his wife anymore. In response, Koh Han Su‘s wife said that she did not know what Sun Ja’s son would think of his father, and this statement changed Han Su‘s attitude.