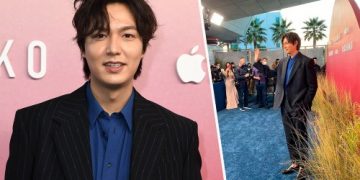 Asia’s leading actor Lee Min Ho is one of the talented actors of Korean and Asian cinema. Especially recently, an interview between actor Lee Min Ho and young actress Kim Min Ha at a promotional event for the movie Pachinko in the US caused a lot of controversy.

While many American netizens think that Lee Min Ho’s English pronunciation and proficiency needs to be improved, Asian netizens defended the actor.

Here are some comments from Asian netizens in response to US netizens’ silly criticism:
“I’m not sure who would criticize him for his English. English is one of the hardest languages ​​to learn. I apologize for my nation. Right now we are a full of reasons to be ashamed. Please give us your grace and understanding .”
“He was born in Korea and I feel it okay to not fluent 2nd language some body can speak English not sure can act or have a better talent like him.”
“English is not his mother tongue. At least he is bi-lingual, though not fluent but better than any of them who probably can only speak and understand English.”
“American people!! he speaks his native language Korean not American English.”
“His acting is phenomenal. He is learning English and should not be for it.”