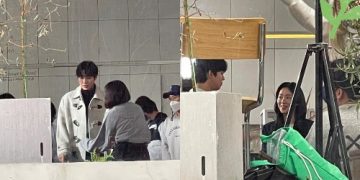 On the morning of April 6, fans discovered Ahn Hyo Seop with Jeon Yeo Been and Kang Hoon appearing at the set of the movie A time called you.
Ahn Hyo Seop is really a hard-working actor when on April 5, the last episode of the series Business Broposal that he participated in aired, on the morning of April 6, he started working for the new movie.
Photos taken by fans on the set of A time called you are spreading rapidly.

The movie A time called you is expected to be broadcast on Netflix.