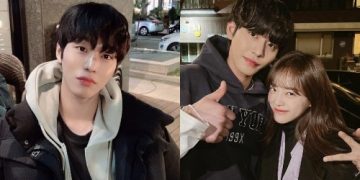 Is it a hint for season 2? Ahn Hyo seop wrote a touching letter after the ‘Business Broposal’ ended and he said that Taemoo and Hari’s story continues.

Is it a hint for season 2? Ahn Hyo seop wrote a touching letter after the ‘Business Broposal’ ended and he said that Taemoo and Hari’s story continues.

Is it a hint for season 2? Ahn Hyo seop wrote a touching letter after the ‘Business Broposal‘ ended and he said that Taemoo and Hari’s story continues.

“Although the drama ended, the story of Taemoo and Hari still goes on.”

On April 6th, Ahn Hyo seop took to Instagram to share thoughts on the wrap-up of ‘A Business Proposal‘ and photos he had taken while filming for the drama. He wrote, “‘A Business Proposal’ ended yesterday. Taemoo and Hari were cold when they first met but Taemoo was later able to find the true self that he hadn’t known before. Although the drama is over, I believe their happiness will continue for life from now on. I’d like to thank everyone who’s been watching ‘A Business Proposal’. We were able to exist because of you. Thank you very much.”

“thank you for all your love and support, from abroad, all the fans, international fans. i just wanna say thank you for the love.”

thank u for everything, im very proud of u and i appreciate how you always include your international supporters🥺#BusinessProposal #AhnHyoseop pic.twitter.com/1X3e12TcjP

The actor added, “I’d like to say thank you to the ‘good people’ who always made me laugh. I think all the love I received through ‘A Business Proposal’ was because of the sincere efforts and affection of everyone, not me. More than anything, every moment was really happy. I want to say thank you to everyone who made me feel happy.”

Ahn Hyo seop then also wrote in English, for his international fans, “I feel like I got more love than I deserve. It was all because of the dedication and hard work everyone put into this project. Thank you so much for all of your love and support. Although the drama ended, the story of Taemoo and Hari still goes on.”

Ahn Hyo seop played the character of Kang Taemoo (also romanized as Kang Taemu) in the drama. Kang Taemoo is the CEO of ‘GO Food’, a subsidiary of the chaebol founded by his grandfather. After graduating from Harvard University, he joined ‘GO Food’, worked at an overseas branch, and returned to Korea.