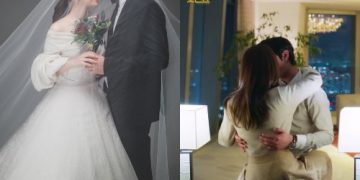 Kim Se Jeong and Ahn Hyo Seop made netizens explode with “Bed scene” in episode 11, Business Proposal episode 12 will end with a wedding?

Kim Se Jeong and Ahn Hyo Seop made netizens explode with “Bed scene” in episode 11, Business Proposal episode 12 will end with a wedding?

Kim Se Jeong and Ahn Hyo Seop made netizens explode with “Bed scene” in episode 11, “Business Proposal” episode 12 will end with a wedding?

In the broadcast, Shin Ha-ri checked out a voice message from her younger brother Shin Ha-min (Choi Byung-chan). However, the person who sent the voice message was Kang Tae-moo (played by Ahn Hyo-seop), not Shin Ha-min. Kang Tae-moo visited Shin Ha-min to contact Shin Ha-ri and borrowed his phone. He said, “Ha-ri. It’s me. Where are you? You don’t answer my call. I have searched everywhere possible but still cannot find you. Are you hiding because you are mad at me? Please contact me.”

Shin Ha-ri then called Kang Tae-moo. Kang Tae-moo hurriedly answered the phone, saying, “Where are you, Ha-ri?” When he heard that she was at Namsan Tower, Kang Tae-moo said, “Don’t move. I’ll be right there.” Kang Tae-moo ran to Shin Ha-ri at once and scolded her, “Do you know how worried I was.” Shin Ha-ri said, “I’m not a child.” Kang Tae-moo hugged Shin Ha-ri, saying, “Don’t disappear from me without saying a word ever again.” The couple then moved indoors and ended the fight with a hot bed scene.

Earlier, Jin Young-seo picked up Shin Ha-ri on her way to work. Jin Young-seo gave Shin Ha-ri the phone that she left behind and said, “Go to YouTube and watch the video of you and Lee Min-woo (Song Won-seok). Yu-ra has caused another trouble.” The YouTube video shows Lee Min-woo and Shin Ha-ri working together, but Lee Min-woo‘s girlfriend Ko Yu-ra (Bae Woo-hee) left a comment. Through the narration of Yu-ra, the comment said, “They look good together. I’m his girlfriend but I also think they are a good match. Extremely. She has been following Min-woo while having a crush on him for seven years, and this time she started flirting with him again using work as an excuse.”

Ko Yu-ra then said, “The funny thing is that her boyfriend is the president of her current company. I can’t stand it because it’s disgusting to see her going back and forth between two men, pretending to be poor and nice, pretending to be a victim.” Shin Ha-ri was shocked, and Kang Tae-moo‘s grandfather, Chairman Kang Da-gu (played by Lee Deok-hwa), also had a headache due to this. In addition, Shin Ha-ri‘s food development team failed to carry out the current project due to the rumor. Kang Tae-moo belatedly learned about this and was worried that Shin Ha-ri would be sad alone.
The latest developments of episode 11 make many netizens waiting for a great ending for the main couple, possibly with a romantic wedding in episode 12.