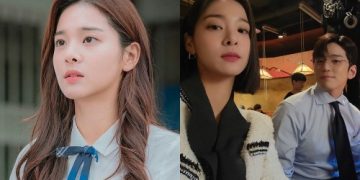 Seol In Ah, who recently gained popularity through “Business Proposal”, is moving to a new agency.

On April 4th, My Daily reported that Seol In Ah will be making a fresh start and not renewing her expired contract with Oui Entertainment, her agency since her debut.

Seol In Ah started her acting career with a minor role in the 2015 KBS’s drama “The Producers”, followed by supporting roles in JTBC’s “Strong Woman Do Bong Soon” and KBS’s “School 2017”. She landed her first lead role in KBS’s 100-episode drama “Beautiful Love, Wonderful Life” in 2019 and appeared in tvN’s “Mr. Queen” in 2020.

She is currently playing the second female lead Jin Young Seo, a chaebol daughter who is having a sizzling romance with secretary Cha Sung Hoon (Kim Min Gyu) in SBS’s “Business Proposal”. She recently drew much attention for her steamy bedroom scene with Kim Min Gyu in the drama.