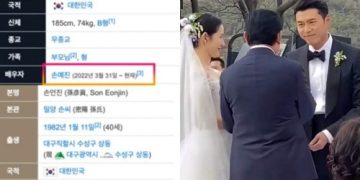 Hyun Bin and Son Ye Jin’s names have now been added to each other’s profiles as spouses!
Hyun Bin and Son Ye Jin, who drew attention from being co-stars to dating and now marriage partners, tied the knot on March 31st in Seoul and were heating up the Internet all day long. The “Wedding of the Century” was held in tight security and had the attendance of many famous Korean actors and singers.

Hyun Bin and Son Ye Jin finally became husband and wife after having a luxurious wedding like in the movie. At the same time, both their profiles now also show that they are married, attracting attention.

Specifically, on a famous portal site, Son Ye Jin and Hyun Bin‘s names have been added to the family columns of each other’s profiles under ‘spouse‘. The wedding date, March 31st, is also written in their profiles. Netizens are sending their blessings and wishes to the newlyweds now that they have officially embarked on a new journey in life together.

After working together in the movie ‘Negotiation‘ and tvN’s hit drama ‘Crash Landing on You‘, Hyun Bin and Son Ye Jin developed feelings for each other, and have been dating publicly since January of last year. They announced their marriage through separate Instagram posts in February of this year.