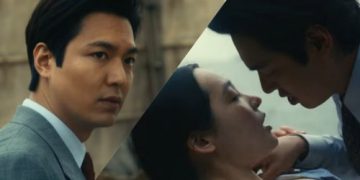 Netizens suspect that “Pachinko” used a cascadeur to play the hot scene instead of Lee Min Ho.
The long-awaited drama “Pachinko” starring Lee Min Ho has released 3 episodes consecutively. The 1st episode tells the backstory of the female lead, from when she was born to the moment she lost her father, intertwining with the scenes in present. Meanwhile, episode 2 focuses more on Sun Ja (Kim Min Ha) when she was a young lady and her romance with Han Su (Lee Min Ho).

Han Su is a merchant who has just returned to Korea from Japan. Han Su is rich and handsome but in people’s eyes, he’s a cold-blooded man who works for those with powers and leads a dissolute life. Sun Ja only knew Han Su through stories told by people around her, while Han Su fell in love with her the moment she accidentally appeared in front of him.

I like the creative decision to not play any music in this scene because it remains unfiltered. It steers away from any possible romanticising and makes way to an accurate depiction of what is a discomfort to watch. So on point with the book.#Pachinko #LeeMinHo #KimMinha pic.twitter.com/BdwpbWIp2X

Han Su saved Sun Ja when she was kidnapped by two Japanese men who tried to rape her. After getting closer, Sun Ja realized that Han Su was not as bad as in the rumors.

In the ending scene of episode 2, Sun Ja decided to end the relationship with the man she loves. After knowing Han Su for a short time, the two already had a hot scene. This hot scene was not revealing or obscene. It only showed the kiss and the female lead’s expressions. However, it still caused a stir as it was Lee Min Ho’s first time filming a hot scene.

The chemistry though 🔥 Soo Hugh was so right about Minho and Minha!#Pachinko #LeeMinHo #KimMinHa pic.twitter.com/KyAUbLfNkR

Lee Min Ho is one of the most handsome Korean actors thanks to his enduring charm over the years. However, the side angle of the actor who played the hot scene in ‘Pachinko’ was not as beautiful as Lee Min Ho’s, making some viewers believe that the person who performed this scene was another actor.

Netizens believe that the above hot scene was not performed by Lee Min Ho:

The side angle doesn’t look like Lee Min Ho, right?
Lee Min Ho’s side angle looks weird.
It looks like it’s a stuntman, not Lee Min Ho
Currently, there is no official information to verify that Lee Min Ho used a stuntman, but it is undeniable that his acting ability in this new project is highly appreciated by many viewers.