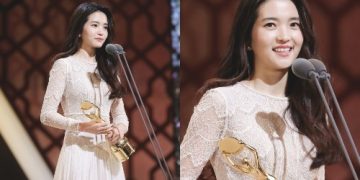 Actress Kim Tae Ri has suddenly become a rising star and at the same time emerged as a new ‘Nation’s First Love’ with her success in the drama ‘Twenty-Five, Twenty-One’ with with Nam Joo Hyuk.

Kim Tae Ri plays a high school girl, Na Hee Do, who overcame the hardships of the IMF financial crisis in 1998.

Hee Do fought with passion and enthusiasm to become a fencing star. She attracts viewers with her cheerful, bold personality.

Hee Do falls in love with Baek Yi Jin (Nam Joo Hyuk), the eldest son of a family that fell apart because of the IMF, who ends up becoming a sports reporter.

‘Twenty-Five, Twenty-One’ recently surpassed the 10% rating according to Nielsen Korea. The series has demonstrated its popularity by taking first place in both the TV news chart and the actor news chart.

According to the drama news ranking published from February 28 to March 6 published by Good Data Corporation, the drama ‘Twenty-five, Twenty-one’ will take first place.

It is also popular abroad, ranking 10th in the world’s most watched shows and TV shows (Netflix). The movie has over 600 users with a rating of 9/10 on IMDb, the world’s largest review site.

While, in the ranking of actors’ topicality, actress Kim Tae Ri is at the top, followed by Nam Joo Hyuk in second place.

What do you think about Kim Tae Ri’s acting in tvN’s drama “Twenty-Five, Twenty-One”?