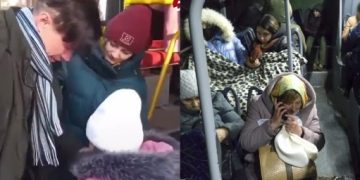 The clip recording the separation moment of a family in Ukraine has caused a strong sensation with more than 11 million views so far.
After Russia launched a military campaign in Ukraine, as a matter of course, the lives of Ukrainians were completely turned upside down. The Ukrainian government declared a state of emergency, civilians began to flock to ATMs to withdraw money, hoard food as well as gasoline …

Kyiv mayor Vitaly Klitschk advised the city’s 3 million residents to stay at home and prepare essential necessities such as food and medicine. However, many people were too scared to dare. stay in his house but seek shelter in the subway station.

Men aged 18-60 cannot leave the #Ukraine, they must stay behind and fight if called upon. Here’s a video of a dad saying goodbye to his daughter. He knows he may never see her again. These are the real stories. Human stories. The atrocities of war. pic.twitter.com/pdGpk7R7xm

According to France24 news agency, while many Ukrainians stay in their homes, some want to evacuate to other places for safety.

During the escalating violence, men between the ages of 18 and 60 were urged by the government to be ready to take up arms; people began to witness tearful separations.

On Twitter, the image of a young father saying goodbye to his daughter is attracting the attention of netizens with about 12 million views. It is known that the girl will be evacuated with her mother (a woman in a blue shirt next to her) and her family to a safe place, while her father is said to “stay to fight”.

Before the moment of saying goodbye to his son, the father gently put on his child a white wool hat to keep warm, his eyes were red, and he placed a quick kiss on the child’s chubby cheek, making viewers feel pity. Seeming to understand what is happening, the girl also sobbed, attached to her father and did not want to leave.

Meanwhile, in another video provided by Germany’s Dw news agency, a middle-aged woman is seen crying while saying: “Where do I go now? I’m alone at work. I know where to go? Tell me”…