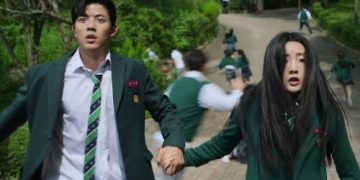 The Korean zombie series “All of Us Are Dead” is No. 1 on Netflix’s weekly chart for the third straight week and climbed to third place among the top 10 most popular non-English TV shows list.

Netflix released its weekly Global Top 10 covering the period Feb. 7 to 13 showing the most watched films and TV shows.

The No. 1 shows and films on Netflix from Feb. 7 to 13 are (clockwise from top left) “All of Us Are Dead” “Inventing Anna,” “The Tinder Swindler” and “Through My Window” (Netflix)
In the top 10 non-English TV, “All of Us Are Dead,” released on Jan. 28, maintained its No. 1 spot as the most watched show for the third week with 113.24 million hours viewed in the seven-day period.

“All of Us Are Dead” is the most watched title on Netflix for the week among English and non-English TV shows. The English show “Inventing Anna: Limited Series” debuted at No. 1 with 77.31 million hours viewed.

According to Netflix, “All of Us Are Dead” placed in the top 10 in 94 countries and territories from Feb. 7 to 13.

“Last but by no means least, ‘All of Us Are Dead’ continues to devour all in its wake as the most watched title this week with an impressive 113.24M hours viewed and within the Top 10 in 94 countries,” it said.

In addition, “All of Us Are Dead,” Netflix said, “climbed to the third spot on the Most Popular non-English TV list with 474.26M hours viewed.” The Most Popular list refers to the most viewed titles in the first 28 days on Netflix.

“All of Us Are Dead” tells the story about a group of students trapped in their high school when zombies invade. It stars Park Ji-hu, Yoon Chan-young, Lomon (aka Park Solomon), Cho Yi-hyun, Yoo In-soo, Lim Jae-hyeok, Son Sang-Yeon and Lee Yoo-mi.
As previously spread information, All of Us Are Dead season 2 has also begun to be kicked off.

Here are the top 10 English and non-English shows and films on Netflix from Feb. 7 to 13: