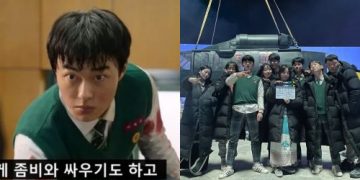 Due to the success and popularity, the first season of ‘All Of Us Are Dead’, rumors have started regarding Season 2 of the same. This is the most heavily advertised K-Drama Zombie Series, with many fans eagerly anticipating a second season.

Veteran director Lee Jae-kyu is said to have planned to bring the character Lee Cheong-san (Yoon Chan-young) back to life, and the film will soon begin filming once the crew has chosen a location. reasonable filming in the context of the prolonged Covid-19 epidemic.
It is known that the context of season 2 will mainly be filmed in Japan.

While the “All of Us Are Dead” is enjoying its hot popularity and has been receiving huge love for 10 consecutive days, actress Park Ji-hoo participated in an online interview and expressed her feelings. She said, “I’m really nervous and I feel grateful for that”.

Park Ji-hoo played Nam On-jo, an easy-going and friendly student. In particular, there was a scene when On-jo’s long-time friend Cheong-san (Yoon Chan-young) confessed to her. However, Cheong-san got bitten by the villain Yoon Gwi-nam (Yoo In-soo). While fighting in a place where there were only two people, the two were burned and died.

At the end of the drama, Choi Nam-ra (Cho Yi-hyun), an immune human who got bitten by a zombie but did not turn into a zombie, appeared and aroused the viewers’ curiosity.

Park Ji-hoo said, “Nam-ra said that there were several friends (who are immune to the zombie virus) like her. I think there would be a confrontation between zombies and the survivors (if Season 2 came out). The survivors in Season 1 have experienced the zombie apocalypse once, so I think they can cope with zombies better”.