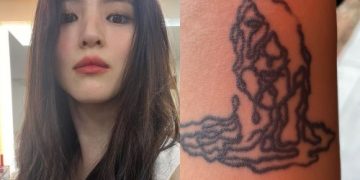 Han So Hee shared a new post including selfies and daily life photos on her personal Instagram in the early morning of the first day of Lunar New Year, captioning, “2022 starts.”

In the first photo, she was running with her arms tilted back as if she was about to fly. In another one, she reveals she was on a diet by eating smoked chicken breast with brown rice. She also boasts her perfect visuals by posting photos of her bare face without makeup and full makeup at the same time.

A tattoo photo especially draws attention. Han So Hee had various tattoos on her arms in the past, but she erased them for her acting career. Therefore, this has stimulated fans’ curiosity as to whether Han So Hee got a new tattoo.