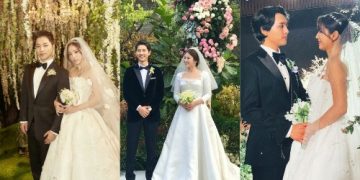 The wedding ceremonies of these couples turned into award shows due to the attendance of many top stars.
Many Korean celebrity couples have gone from dating to walking down the aisle together. Their weddings undoubtedly draw much attention. The wedding ceremonies of the following Korean stars take netizens by surprise with an amazing guest lineup that is no different from an awards ceremony. This proves the impressive network within the industry of the main couples.
1.Park Shin Hye – Choi Tae Joon
The spectacular wedding of Park Shin Hye and Choi Tae Joon has gained all the spotlight in the last weekend. The bride Park Shin Hye shows off her radiant and timeless beauty in a stunning white bridal gown. The groom impresses with his handsome and mature appearance in an elegant black tuxedo. In addition, the two make fans excited by their sweet, intimate gestures towards one another.

In particular, D.O (EXO) and Crush sang the romantic song “Beautiful” as a gift to the couple. Lee Hong Ki performed That’s Me – the soundtrack for The Heirs, one of Park Shin Hye’s most famous dramas. Zico even wrote a poem to congratulate the important day of his two best friends. 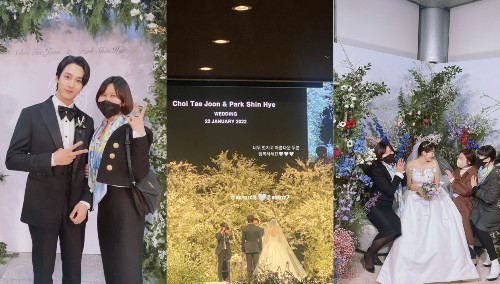 2.Song Joong Ki – Song Hye Kyo
Although Song Joong Ki and Song Hye Kyo have divorced, when it comes to the biggest wedding of Korea’s entertainment industry, Song – Song’s wedding must be mentioned. After they confirmed they were dating and announced their marriage, the duo of A-list actors received many blessings from fans and the public. In the ceremony that took place on October 31, 2017, Song – Song did not disappoint people by the grandeur and luxury of their wedding.

In addition to the huge spending for the entire wedding ceremony, the “Descendants of the Sun” star couple caused a storm when they invited all the big stars. Accordingly, many famous Korean celebrities such as Park Hyung Sik, Yoo Ah In, So Ji Sub, Park Sol Mi, Choi Ji Woo, Kim Hee Sun, Park Bo Young, the Running Man cast and the whole cast and screenwriter of “Descendants of the Sun”. In addition, the couple’s wedding ceremony also had the presence of the famous female star Zhang Ziyi, which made many people admire.

3.Jang Dong Gun – Go So Young
The couple Jang Dong Gun and Go So Young also caused a stir when they held a super wedding on May 2nd, 2010. It can be said that this is one of the most luxurious weddings in Korea. It is known that the actor spent about 1 billion won for his big day. During the wedding ceremony held at the Shilla Hotel (Seoul, South Korea), the couple appeared in a grand manner in front of the guests.

It is worth mentioning that the couple’s happy day was attended by a huge star cast. Prominent among the 550 guests were top names such as Bi Rain, Hyun Bin, Ha Ji Won, Kim Nam Joo and his wife, So Ji Sub, Shin Min Ah, Song Seung Hyun. Due to the attendance of all these famous guests, the couple’s wedding ceremony received a lot of attention from the press. At the wedding of the century, 400 reporters from many countries were present early to report. 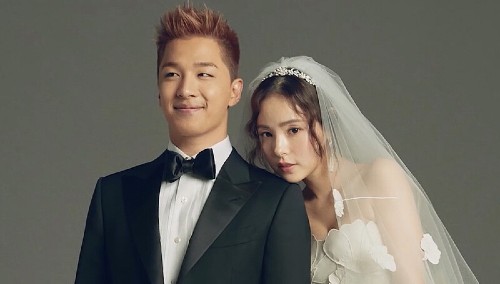 Just like many people’s expectations, the remaining four members of BIGBANG, G-Dragon, Daesung, Seungri and T.O.P all came to celebrate with Taeyang. Daesung plays the role of host, Seungri takes care of the entertainment part of his co-member’s wedding.

Many weddings of Korean stars have made fans feel proud because of their luxury and grandeur. In addition, the presence of the famous stars made the weddings pretty much the equivalent of a fancy awards ceremony red carpet, which made netizens extremely excited.