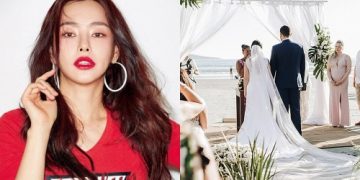 Honey Lee – The person who was dubbed “the most beautiful Miss Korea” – is currently pregnant with her first child in the fourth month.

On the morning of January 16, a representative of Saram Entertainment – the actor’s management company – told Sports Chosun, “A precious new life has found its way to actress Honey Lee,” stating the agency. “She is still at the stage where she needs rest and stability, so we are wary of providing precise details. We respectfully ask for your understanding.”
Miss and her husband outside the entertainment industry got married on December 21, 2021 with a small party in Seoul in the blessing of the family. The beauty publicly had a boyfriend in early November 2021. On Chosun, an acquaintance of Honey Lee revealed that the two shared many interests and had similar views on life.

At the SBS year-end awards ceremony on December 31, 2021, when she received the “Best Actress” award for her role in the movie One the Woman, she expressed her love for her husband. “A lot of good things have happened recently. I want to share the joy with my other half, with whom I will spend the rest of my life,” she said.