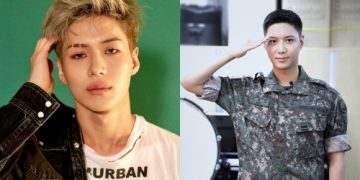 Currently, fans are extremely worried about him.
On January 14, SM Entertainment announced that Taemin was decided by the military agency to transfer him from the military group to public service due to worsening symptoms of depression and anxiety.

After initial enlistment as a member of a military band, SHINee’s Taemin will complete the remainder of his military service as a public service worker.

“This is SM Entertainment.
As of January 14, 2022, Taemin was transferred from the military band of the Ministry of National Defense Services to the public service division.
During his military service, Taemin continuously received treatment and counseling for his symptoms of depression and panic disorder, which he has dealt with from the past. However, his symptoms recently worsened and thus, the Military Manpower Administration has decided that it was no longer possible for him to simultaneously receive treatment while serving active duty. Thus, Taemin was transferred to public service duty according to the military’s policies.
As a result, Taemin will be completing his military service duties as a social service worker from now on.
We apologize for concerning you with this sudden news. We will continue to focus on Taemin’s treatment and do our best to help him become stable.
Thank you.”