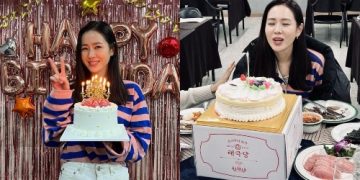 Hyun Bin was absent from the birthday party of his fiancee Son Ye Jin.
On January 11, actress Son Ye Jin celebrated her 40th birthday alongside close friends and the cast of the movie Thirty Nine.
What made the audience curious was why didn’t her boyfriend Hyun Bin appear at her birthday party. However, this does not seem to be strange when the two have always limited in sharing photos taken together on social networks since publicly dating.

The three actresses flawlessly portrayed the close friendship of their characters. They showcased natural chemistry by saying rough lines in an affectionate manner, and they depicted their characters’ hardships in such an effective manner that it made everyone at the script reading tear up and hold their breaths.

Son Ye Jin skillfully expressed Cha Mi Jo’s wisdom and warmth, while Jeon Mi Do overwhelmed everyone with her performance as she represented Jung Chan Young’s honest and outspoken nature. Kim Ji Hyun exuded lovely charms as she transformed into Jang Joo Hee to pull out the character’s pure and silly sides.

Yeon Woo Jin, Lee Moo Saeng, and Lee Tae hwan will create romance and tension with these three actresses. First off, Yeon Woo Jin will take the role of Kim Sun Woo, a dermatologist who works at the same hospital as Cha Mi Jo. Yeon Woo Jin created a heart-fluttering atmosphere at the script reading by portraying Kim Sun Woo’s sweet and thoughtful charms and his pure love for one woman.

Lee Moo Saeng will turn into Kim Jin Seok, the CEO of Champ Entertainment. The actor exhibited Kim Jin Seok’s seriousness, and he also grabbed everyone’s attention with his affectionate emotional acting with Jeon Mi Do. Lee Tae Hwan, who will act as Park Hyun Joon, the CEO and chef of China Town, displayed his character’s perseverance for his career and his youthful and refreshing chemistry with Kim Ji Hyun.