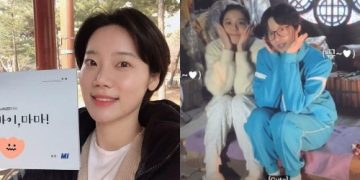 The Disney+ drama “Kiss Sixth Sense,” in which the late Kim Mi-soo was starring following “Snowdrop,” canceled its filming schedule.
Kim Mi Soo participated in two movies “Kiss Sixth Sense” and “Snowdrop” before her death. Her sudden departure made her associates psychologically affected.

The departure of Kim Mi Soo at the age of 31 on January 5 shocked the Korean artist world and public opinion. The cause of death of the actress is kept secret by the family and the management company. Yonhap News reported that Kim Mi Soo was found unconscious at her home.

According to SportsTV News, the crew of Kiss Sixth Sense canceled the filming schedule after receiving the announcement that Kim Mi Soo had suddenly passed away. This is the project she collaborated with Seo Ji Hye, Yoon Kye Sang. The source said that the artist and staff members were shocked and saddened by the passing of Kim Mi Soo. Therefore, they decided to pause filming to share the loss with the family of the late artist.

Meanwhile, the producer Snowdrop sent condolences to the artist’s family on the media. The representative said that they are considering postponing the broadcast of episode 8 of the drama, scheduled to air on January 8 in memory of the actress.

“We have not made a final decision. The postponement or re-editing of segments featuring Kim Mi Soo is being discussed by the crew with the artist’s family and related parties,” the producer Snowdrop said. . In the movie, Kim Mi Soo plays the role of Yeo Jeong Min – roommate 207 of Ji Soo (BlackPink), Jung Shin Hye, Choi Hee Jin.

According to Yonhap News, Kim Mi Soo’s funeral was held privately according to the family’s wishes on January 7, at Taereungseong Heart funeral home, Seoul.

Kim Mi Soo is a South Korean actress and model. She joined showbiz in 2013 with a role in the short film Artist. In 2018, Kim Mi Soo’s name was known thanks to the work “Lipstick Revolution”. Then, she appeared in Hi Bye, Mama!, One Night, Teacher Watch.

Colleagues in the world said that Kim Mi Soo lives a simple life with an introverted personality. She doesn’t use social media