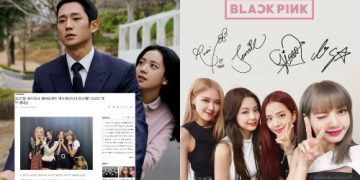 Knet and Korean media are going crazy when denouncing “BLACKPINK promoted “Snowdrop.” Is supporting a member more important than the country’s history?”
Knets and Korean media are really going crazy when releasing negative information for “Snowdrop“, especially it spreads to BLACKPINK.
Recently, the Korean newspaper Daum published an article that angered the international BLACKPINK fan community by blaming the girl group for destroying Korean history.
We would like to quote it: 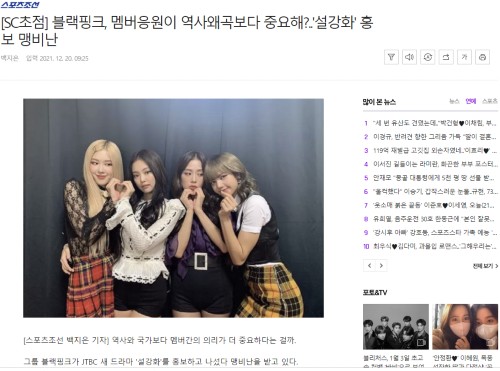 Knets are criticizing BLACKPINK for promoting JTBC’s drama “Snowdrop”, starring Jisoo, questioning whether the loyalty between members is more important than the country’s history.

BLACKPINK Jisoo challenged herself with drama acting plays the role of Youngro in her debut work“Snowdrop”. Therefore, the members continuously cheered for her. The “warm scene” of teamwork when members in the same group show support for their teammates’ personal activities often receive compliments. However, the result is different this time since drama “Snowdrop” is being criticized for distortion of history.

Even before its official broadcast, “Snowdrop” was embroiled in various controversies over disparaging the democratic movement, beautifying the National Security Planning Agency, and using National Security Planning Agency and armed spies as drama materials. Although the production team explained in advance, saying, “You will change your opinions after watching the drama”, the situation became more serious after “Snowdrop” was aired.

From the when Eun Young-ro (Jisoo) misunderstood the spy Im Su-ho (Jung Hae-in) as an activist and saved him to the scene of a protest, the first episode of the drama already drew criticism. After that, a petition for suspending the broadcast of “Snowdrop” appeared on December 19th and gathered about 220,000 signatures in just one day. Eventually, sponsors and advertisers for “Snowdrop” posted their apologies and withdrew all their sponsorships and advertisements related to this drama.

Amidst all these controversies, it is pointed out that BLACKPINK members’ supportive messages for Jisoo’s appearance in the drama were thoughtless actions, proving that they didn’t pay attention to the history issue.

Domestic fans know their history well, but overseas fans do not know anything about the history of Korea. They are watching “Snowdrop” just to see Jisoo. That’s why the story portrayed in this drama can instill false historical details in overseas fans.

BLACKPINK is one of the top global KPOP girl groups that is recognized by many fans all around the world. They have more than 70 million Youtube subscribers, setting the highest record in the history of all male and female artists worldwide. In addition, they are also showing their global influence in different fields, with all members working as ambassadors and muses for various luxury brands. Therefore, people raised concerns that the scope of historical distortion could expand even more if the girl group promotes this ‘historical distortion’ drama with their huge reputation and impact. This is why netizens are getting angrier and more worried when it comes to “Snowdrop” than when “Joseon Exorcist”, which was also one of the dramas that caused controversy over historical distortion, was aired.

BLACKPINK must also be aware of their significant influence. Joining the promotion for this drama just to support their member can also cause a big problem. Moreover, their company, YG Entertainment, cannot be free from taking responsibility for this issue.
Do you think Knets and the Korean media are really overdoing this?