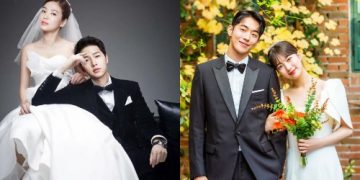 YouTuber Simply SSOL shared the five things you should know if you want to marry a Korean. As a Korean American, the advice shared from her perspective is illuminating, to say the least! (Of course, all of these things are generalizations based on her own experiences, so please be sure to take things with a grain of salt.)

Netizens are showing explosive reactions after a Youtube channel revealed Park Shin Hye’s wedding gift was given by her husband Choi Tae Joon.

You shouldn’t expect a huge, grand proposal like the kind you see in movies and TV shows. Her proposal took place a week before her wedding!

What I’ve noticed in Korea is proposals are done after the wedding date is set, you’ve got your wedding dress, the invitations are out, and everything is already set.

One of her husband’s friends experienced difficulties during wedding planning because their parents didn’t get along, and because of that the marriage ended up being broken.

I feel like in Western cultures you don’t ask your parents for permission to marry this person. It’s more like you announce it, ‘hey mom, this is who I’m getting married to.’

3. Men have to prepare the house

She observes that it’s the man’s responsibility to provide the house, while it’s the woman’s job to furnish the house and turn it into a home.

Men have to prepare the house, whether if its… usually if they buy a house with full cash it’s usually their parents helping out. You know, not everyone has that ability to buy a house, so they get loans.

You have to gift your parents-in-law cash that is a percentage of what your house (which they likely paid for) back to them. You’re also supposed to buy nice gifts for the parents. For example, she bought her mother-in-law a luxury bag.

Again, this is Korean culture, I’m not saying this is bad but this is something that I really didn’t understand. If he prepares the house, I’m supposed to give him… his mother-in-law, or his parents, cash in an envelope. And, it’s like a certain percent of how much the house was. I can’t remember how much the percent was but it’s not a small amount.

It’s more common to give cash than gifts at weddings, and the amount varies depending on how close you are with the couple.

I didn’t receive much gifts. Mostly cash. In Korea, it’s considered you’re supposed to give cash to the other person if they’re getting married instead of a gift.

Did you learn anything new?