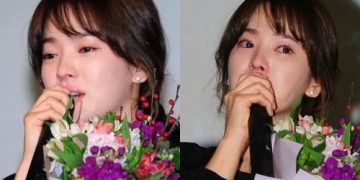 Song Hye-Kyo fans accused against her agency for not taking action to protect her + sent a petition to the Blue House.

Song Hye-Kyo fans accused against her agency for not taking action to protect her + sent a petition to the Blue House.

Song Hye-Kyo fans protested her agency for not taking action to protect her + sent a petition to the Blue House.

Song Hye Kyo’s fans announced that they would hold large-scale collective protests to protest the management company’s failure to handle malicious attacks against her on social networks.

Song Hye Kyo’s fan union representative stated on December 1, there are currently many malicious attacks against actors on the Internet, but her management company does not have any enhanced measures to protect their artist. The group of fans decided to fax, write letters and use protest vans to react to the company.

SHKDC is in the news. How fans protested against UAA for the poor handling against haters. The fans are always wanting to sue #SongHyeKyo haters. pic.twitter.com/Y2ldAqZgnB

Song Hye Kyo’s fans emphasized that the actress’s management company is not interested in protecting the artist’s legitimate rights and interests. The group pointed out, actor Yoo Ah In – who is in the same company as Song Hye Kyo – was also maliciously attacked online, but the company also completely ignored it.

To the response of Song Hye Kyo’s fans, United Artists Agency, the actor’s management company, did not respond. The actor also did not have any sharing.

The firepower of angry fans eventually led to a national petition.#SongHyeKyo's fandom, DC Inside SHK's gall shared a petition w/ the Blue House, 'We urge the BH to strengthen the law to severely punish malicious YouTubers & those who make malicious comments as a profession'. pic.twitter.com/9bxHYBo1YX

On the same day, the petitioner said, “They produce and distribute malicious videos just to gain financial benefits. This is obviously a violent act and personal attack.”

They added, “YouTubers who created indiscriminate content that bothered not only the celebrity but also her family and fandom with distorted lies should definitely be punished. There have been numerous victims of the spread of false rumors and yet they are suffering from difficulties due to lies which were made without sanctions.”

In addition, the petitioner also expressed their disagreement towards the media. They pointed out, “The duty of journalists is to inform people only the truth with an objective view, such as fair news, legitimate information collection, privacy protection, and proper use of information. However, they are making articles by copying information and modifying only a few words but not even checking the truth.”

#SongHyeKyo's fandom is angry..Notice of accusation against the agency
Song Hye Kyo's fandom is raising their voice that malicious comments that go beyond the limit should be punished. They emphasized, "We must continue to sue," & "Please sue even for fans who are under stress." pic.twitter.com/BGIhU3IYEd

Lastly, they requested, “These people should be strongly regulated and punished so that no victims will appear again. Please strictly raise the level of punishments so that no one will be attacked just because they are celebrities or public figures.”

The reason Song Hye-kyo‘s fans shared the petition is that unconfirmed rumors surrounding her have recently spread widely.

Citing Song Hye-kyo’s tax evasion in the past, a Youtuber argued that Song Hye-kyo was not under full-scale investigations by the National Tax Service because lawyer Jung Chul-seung, co-founder of Song Hye-kyo’s agency, had taken care of everything from behind.

The video revealing this claim has attracted 2 million views.

In addition, there are many YouTubers who make videos to distribute unconfirmed rumors about Song Hye-kyo, which have recorded more than millions of views.

Fans raised their voices that accusations and charges should be taken in connection with defamation and insults towards them. With the firepower of Song Hye-kyo‘s fandom on its back, the national petition became a hot topic as it gathered more than 7,000 petitioners in one day.

Song Hye-kyo‘s fandom protested against the agency’s insufficient response and announced that they would file a complaint against these above-mentioned YouTubers for defamation. However, the company has not issued any statement in this regard.