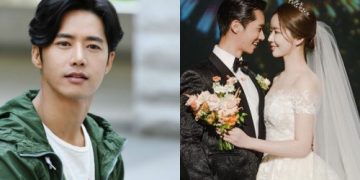 On December 2, Oh Jong Hyuk shared on Instagram the good news that he and his wife are expecting their first child.

Oh Jong Hyuk wrote, “I’m becoming a father! It feels like our wedding was only yesterday, but after seven months, a precious gift has found its way to us.”

He added that the baby’s special name is “Ddo-bok”, Oh Jong Hyuk continued, “As Ddo-bok’s dad, I will pledge my utmost devotion to both Ddo-bok, who will grow healthily inside their mom’s tummy , and my bride, who will be suffering for 10 months. Ddo-bok, come quickly and play with Dad!”

Oh Jong Hyuk, who debuted as a member of Click-B in 1999 and has since been active as a singer and actor, married his non-celebrity wife in April this year. Initially, the couple planned to get married in May 2020, but then their wedding was postponed due to the COVID-19 pandemic.