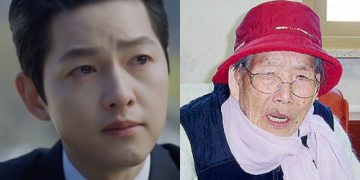 According to media outlet reports on November 30, actor Song Joong Ki’s grandmother has passed away.

The actor’s grandmother is said to have passed back on November 28, and the funeral was held this morning (November 30), with only close family present.
Song Joong-ki reportedly visited the mortuary to share his sadness with his family after hearing the sad news and held a quiet funeral for his beloved grandmother.
Meanwhile, Song Joong-ki recently won the “Popular Star Award” for the movie “Space Sweepers” at the Blue Dragon Film Awards held on the 26th. And Song Joong Ki is currently preparing for his return to the small-screen in his new JTBC series ‘The Youngest Son of the Chaebol Family’, expected to air some time in 2022.