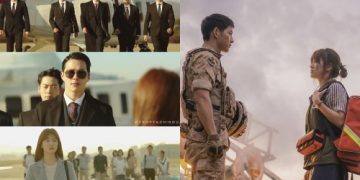 ‘Descendants of the Sun’ is a multiple-award-winning, smash-hit Korean drama, which debuted in 2016 on KBS2. Garnering an audience share of around 40% in the country, it was eventually released across Asia, Africa, the UK, and the US. The show had a strong cultural impact in Korea, leading to an increase in tourism, and was adapted for remakes in many regions.

It is because of its great success that fans have always wanted it to be produced in season 2 for the past 5 years.
Recently, a page specializing in Korean news suddenly posted an edited photo with the appearance of actor Jang Ki Yong and actress Song Hye Kyo with the hope that they will appear in Descendants of the Sun season 2. 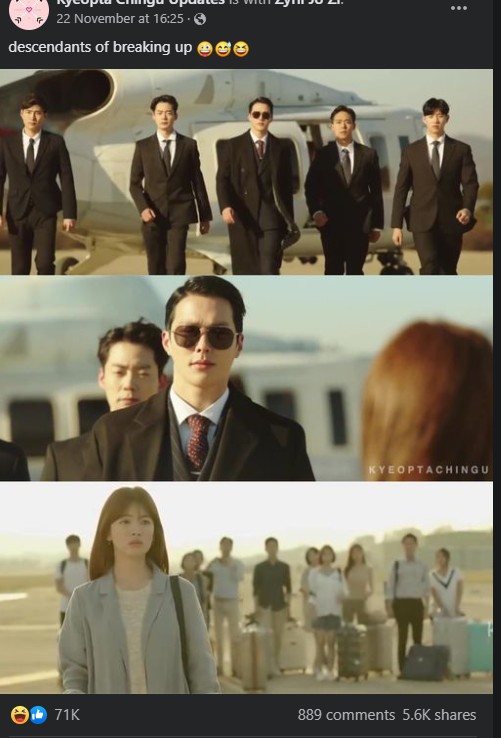 Immediately, fans responded by commenting and creating a storm of likes and shares for the photo on the facebook platform.
Netizens all think that if Descendants of the Sun is chosen by the producer to continue season 2, there is no chance for the Song Song couple to reunite. That’s why Jang Ki Yong will be a great alternative, through the currently airing drama “Now, We Are Breaking Up“, which also shows the good chemistry of the lead couple Song Hye Kyo and Jang Ki Yong. .
Currently, Jang Ki Yong is in the process of enlisting, the military environment will help him perfect himself and especially if there is Descendants of the Sun season 2, he will be able to play the role of “Captain” in a good way.
‘Descendants of the Sun’ Season 1 premiered in Korea on KBS2 on February 24, 2016. After spanning 16 episodes, it concluded with its finale on April 14, 2016. The show, after its release, was a major hit, because of which it was later broadcast in several countries. Viewers from the US can watch the series on Netflix, where it is streaming currently.

Since its finale, there have been multiple reports that the popular K-drama is set to make a comeback. However, amidst the rumors, there is also this bit of news that Song Joong Ki and Song Hye Kyo might not be a part of the lead cast. Additionally, as per reports, a second season is already under pre-production. KBS’s Head of Drama, Jung Sung-ho stated that a “sequel is in planning and filming would likely take place in Greece.” It was speculated that the new season would launch sometime in 2017. But to date, even after almost three years, there’s no official announcement on a concrete timeline. Considering everything, the most optimistic estimate for ‘Descendants of the Sun’ Season 2 release date would be sometime in 2022. We will update this section as soon as we learn more.