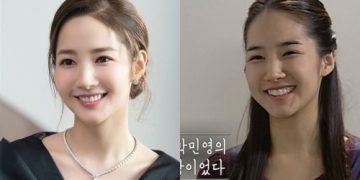 Actress Park Min Young shared that she thinks she was not pretty during ‘High Kick!’ in 2006.

In this special episode, the documentary dealt with 2006’s mega-hit sitcom ‘High Kick!’.

It was the part where actor Kim Hye-seong (Lee Min-ho) stared at Park Min Young (Kang Yu-mi) and said to himself, “Wow, she’s so gorgeous.”

While Park Min Young watched this part, she screamed out loud and commented, “Oh, no!”
She explained why she screamed, “Oh my…! He’s saying that I look gorgeous, but I don’t look pretty at all.”

She then watched the episode with her mouth covered as if she was shocked to see how she looked back then.

The fact that Park Min Young did not like the way she looked in 2006 even though she was so young and beautiful, made all fans shrug their shoulders.
Previously, on a broadcast on MBC, our lovely actress Park Min Young also strongly admitted that she had undergone plastic surgery to make herself more beautiful. She once revealed that she always wants to appear beautiful in the eyes of the audience and this shows that she respects her audience.