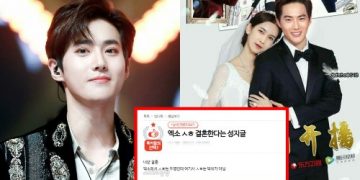 An article predicting that EXO member Suho (Kim Joon-myeon) will get married is drawing attention. As several articles have accurately predicted the EXO members’ private life, the attention is huge.

On Nov 16th, a netizen posted on the online community Nate board that, “EXO’s SH will get married in February next year,” adding, “There are 2 SH in EXO, but he is not the youngest one.”

Among EXO members, only 2 members Suho and Sehun have the initial consonants “SH” in their name. By explaining that the mentioned member is not the youngest, this account is directly pointing at Suho as the youngest member of EXO is Sehun. This claim was also raised on the 30th of last month.

Suho is currently serving in the military as a social service worker. The date of his discharge is February 13th next year, coinciding with the mentioned marriage period.

There is no detailed explanation and it can be dismissed as a rumor, but EXO fans are paying close attention. This is because EXO member Chen also got his marriage predicted before announcing his girlfriend’s pregnancy and marriage in January last year.

A netizen asked, “Is it true that EXO Chen is getting married soon?” in a post titled “EXO Chen’s marriage.” The article was posted on Christmas Day in 2019.

At that time, netizens had responded coldly, defining the article as a baseless rumor, saying “That’s nonsense. Where did you hear such nonsense?” However, Chen announced his marriage about a month later.

It is for this reason that fans are anxious about EXO‘s wedding prediction. In the article predicting Suho‘s marriage, a netizen said, “I didn’t believe in this kind of thing, but as it has been correct a few times before, I’m scared that it might be correct this time too.” Another netizen said, “I’m ignoring this nonsense, but then, it’s strangely credible because it’s EXO.”

The reactions of other netizens were no different. Some netizens even claimed that Suho is currently in a relationship.

When Suho joined the military in May last year, he said goodbye to fans by releasing a handwritten letter that reads, “I will soon perform my military service. During that time, I think I will really miss our EXO-L (fan club nickname). I hope EXO-L, who will always think about me and love me tomorrow, will always be healthy.”