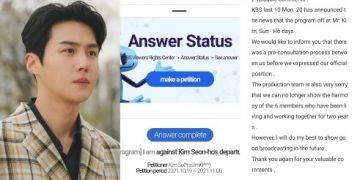 KBS already responded to our petition on their website! 😞💔 #KimSeonHo pic.twitter.com/O1q2PghurB

“Does it means KSH will not return to this show again ? I feel suffocated..at least give him a proper good bye then..so all his fans in the show will not hurt this much..at least show him a little appreciation please..i feel hurt..”

Olivia
“No need doing their best, bec this show has done it AGAIN! This is not the first time and they never learn. Brotherhood? Morals? I refuse to believe it anymore. They think doing this will bring harmony to the future of the show? It’s been tarnished and ruin already. #KimSeonHo “

“Same thoughts,reality slaps me,it’s not a family but a showbusiness. From this day forward i’ll be focusing my energy to support Seonho…for Choi Young Ah!!!allow me to curse you until i get tired and all the anger that grew in my heart vanish.! prayers for your soul!!!”

“Pre consultation. Just minutes/few hours after the apology, they kicked him out. What a lame excuse.”

“KSH is the one who decided to leave the show. They did not kicked him out.”

“I’m ok with KSH decided to leave the show, but KBS just show that it is ok to ignore our member when she/he having problems, don’t say her/his name anymore, pretend that she/he never be in our family..la la la la”

“Exactly…I respect his decision but not KBS editing. He has equally contributed to the success of the show. And that despite his hectic schedule”

“ok bye 2d1n, waiting for a respectful and open minded channel to get our gem”

“What is the value for young generation? the young generation will learn that “just ignore your family member if they have problems, pretend that we weren’t a family before”

“Kbs just gladly accepted KSH’s resignation and didn’t even give options on the repercussions and reactions of viewers. They’re washing their hands early thinking this issue will not affect them. Well it did, internationally! #KimSeonHo #KimSeonHoWorldwide “

“goodbye #2d1nseason4  at least I had my happiest time with you for the past 2 years, and now I have to let go the precious time we shared before. thankyou #kbs2 for letting us down and kill a lot of hearts”

“Even KSH will not come back, but how about the decision of editing him out of the previous shooting episode? That’s injustice and unfair.”

Olivia
“We really dont know what happen for KSH to leave. Was his reason mutal,forced,manipulated,reasonable enough giving him no option but to resign?! Sadly, It’s big bucks against morality. They’ve done it and for sure will do it again. Good luck to the members. #KimSeonHo”

“I think the problems is bigger than it seems. Lets face the reality it’s hard for him to show his face & pretend like nothing happened while it’s broken inside. It needs a lot of courages. Please don’t cancel 5 of them. I wanna protect this family… so the home is still remains.”
Tags: Kim Seon Ho
Share275Tweet172Pin62
ADVERTISEMENT