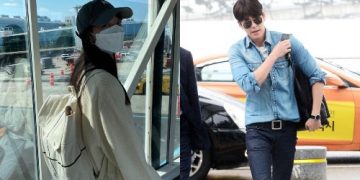 Kbiz today: Kim Woo Bin appeared with a bright smile and enjoyed with his girlfriend Shin Min Ah on the set in Jeju Island.

Announced 5 Best K-Dramas In 2021 According Chosen By 200 Industry Insiders.

Actress Shin Min Ah also updated photos at the airport on her Instagram page with the caption: “No, it’s not like that. It was hanging around Woozy face”.

#ShinMinah IG Update
“No, it’s not like that. It was hanging around Woozy face”🧡🧡 pic.twitter.com/rYBarpZXRz

‘Our Blues‘ is predicted to be a TV blockbuster next year after having a huge cast, including the golden Korean couple Shin Min Ah and Kim Woo Bin.
It is known that recently Shin Min Ah and Kim Woo Bin are also rumored to be preparing to get married spread on Nate Pann.
The upcoming series “Our Blues” will have a star-studded cast including Lee Byung-hun, Shin Min-a, Cha Seung-won, Lee Jung-eun, Han Ji-min, Kim Woo-Bin and Uhm Jung-hwa.

“Our Blues” is set on Jeju Island and will tell stories about various people living on the island in an omnibus format.

Lee Byung-hun will play a Jeju-born man who sells products from his truck. Shin will portray a woman who recently moved to Jeju.

Lee Jung-eun’s character is a tough fish shop owner who reunites with her first love, played by Cha, a man who moves back to Jeju after living in cities.

Han will portray a haenyeo, a diver who gathers seafood underwater, who is new in Jeju. Kim will play a pure-hearted captain of a fisherboat, and Uhm a woman who becomes tired of city life and comes back to Jeju.

The series is set to air next year, but the channel on which it will air has not been decided.