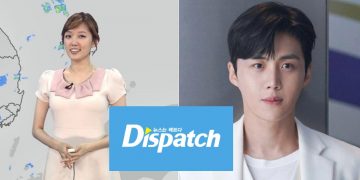 “This is Kakaotalk that Choi Young Ah directly photographed and sent to acquaintances. What “trash” answer did Kim Seon Ho leave behind as Choi Young Ah said? Dispatch does not see garbage in the eyes of Dispatch. Can readers see it?” He really is a good boy.

We would like to quote the text message and translate it from Korean.
Message page 1: 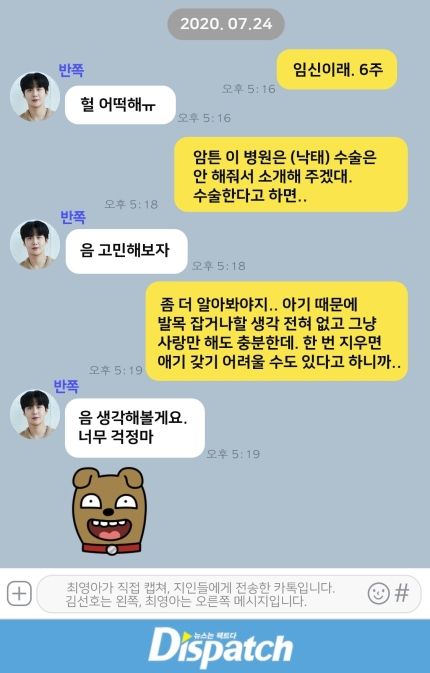 CYA: This clinic does not offer abortions, though. So if I want to get rid of the baby, they’ll refer me to one that does offer the service.

KSH: Hmm. Okay, let’s think about it together.

CYA: Yeah, we need to look into our options. But I really have no intention of tying you down with this baby. I honestly don’t need anything else but your love. I’m only hesitating because the doctor said if I get rid of the baby now, it may complicate my future pregnancies.

KSH: Mm. Okay. Give me some time to think, but don’t worry too much. 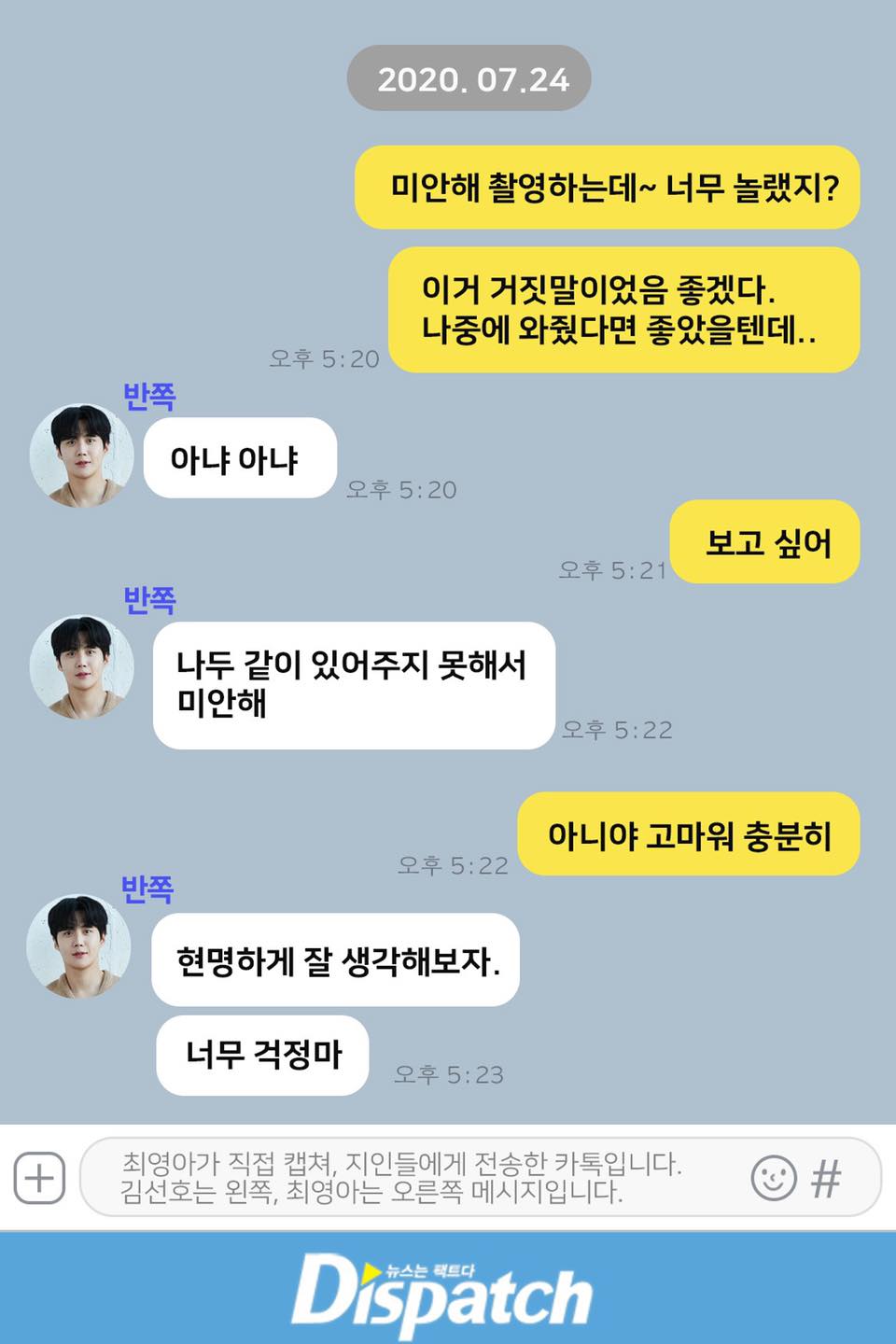 CYA: I wish it wasn’t true. It would have been better if the baby came to us later…

KSH: I miss you too and I’m sorry I can’t be there with you.

KSH: We can think about this and make good decisions together.

KSH: There’s nothing to worry about.

Kim Seon Ho texted back with undivided support about the pregnancy.

KSH: What are you up to?

CYA: I’m pulled over on the side of the street, kind of spacing out for a bit.

KSH: I think we should at least tell my parents.

CYA: Okay, hehe. I listened to you and wore a mask even though I’m by myself. (Deleted media)

KSH: No matter what happens…

KSH: I’m going to take care of you.

KSH: So stop worrying and go home. Get some rest.

CYA: Babe… My heart is racing! What you said really moved me to tears. Thank you so much.

The KakaoTalk chat logs revealed that Kim Seon Ho actually suggested that the two get married—drawing a stark contrast to the claims made in the ex-girlfriend’s revelation. 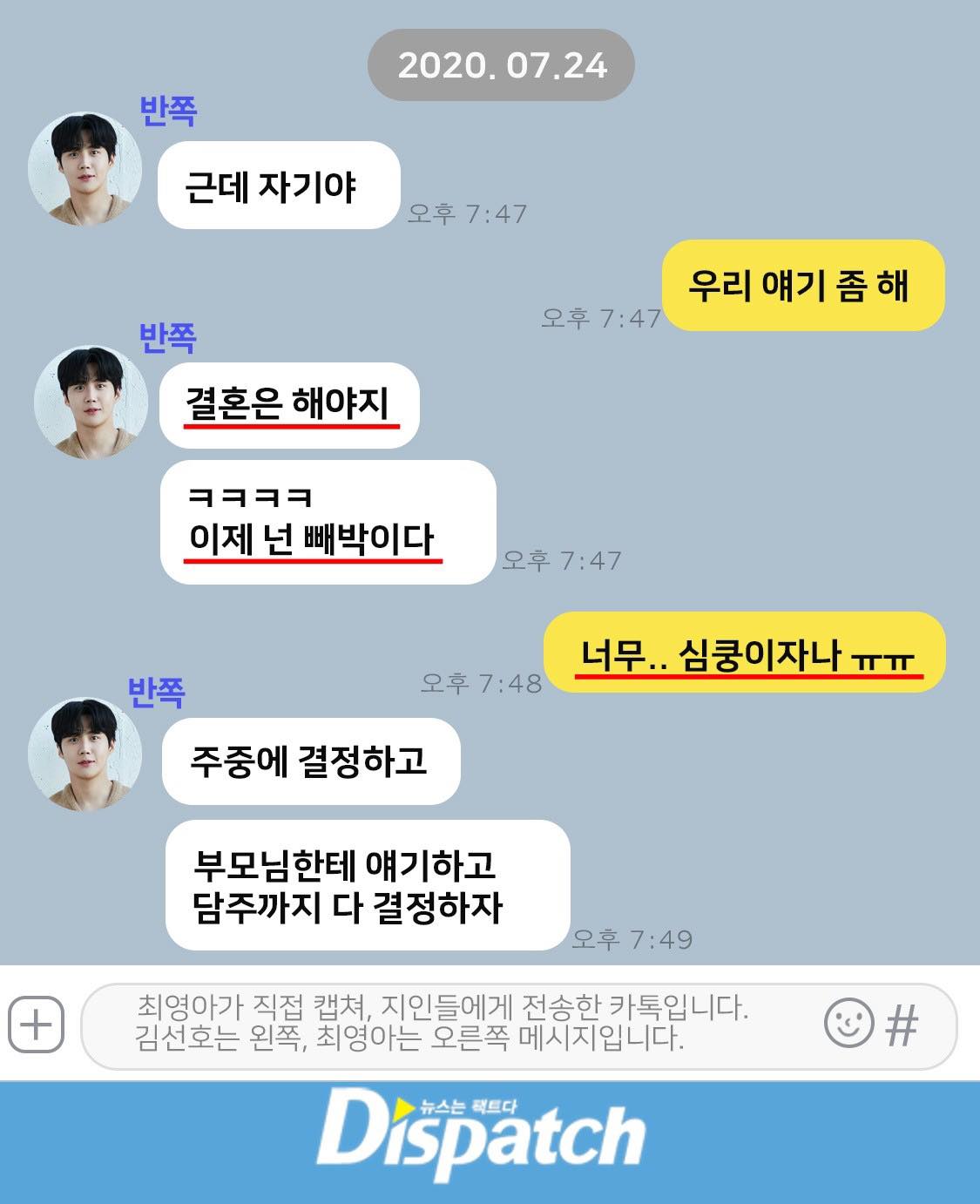 CYA: We need to talk.

KSH: We need to get married.

KSH: You don’t have a choice now.

KSH: We should come up with a plan over the week.

KSH: We’ll tell my parents and settle everything by next week.

Additionally, as Dispatch revealed, Kim Seon Ho sent words of consolation when the ex-girlfriend shared worries about the baby, the potential abortion, and their future. 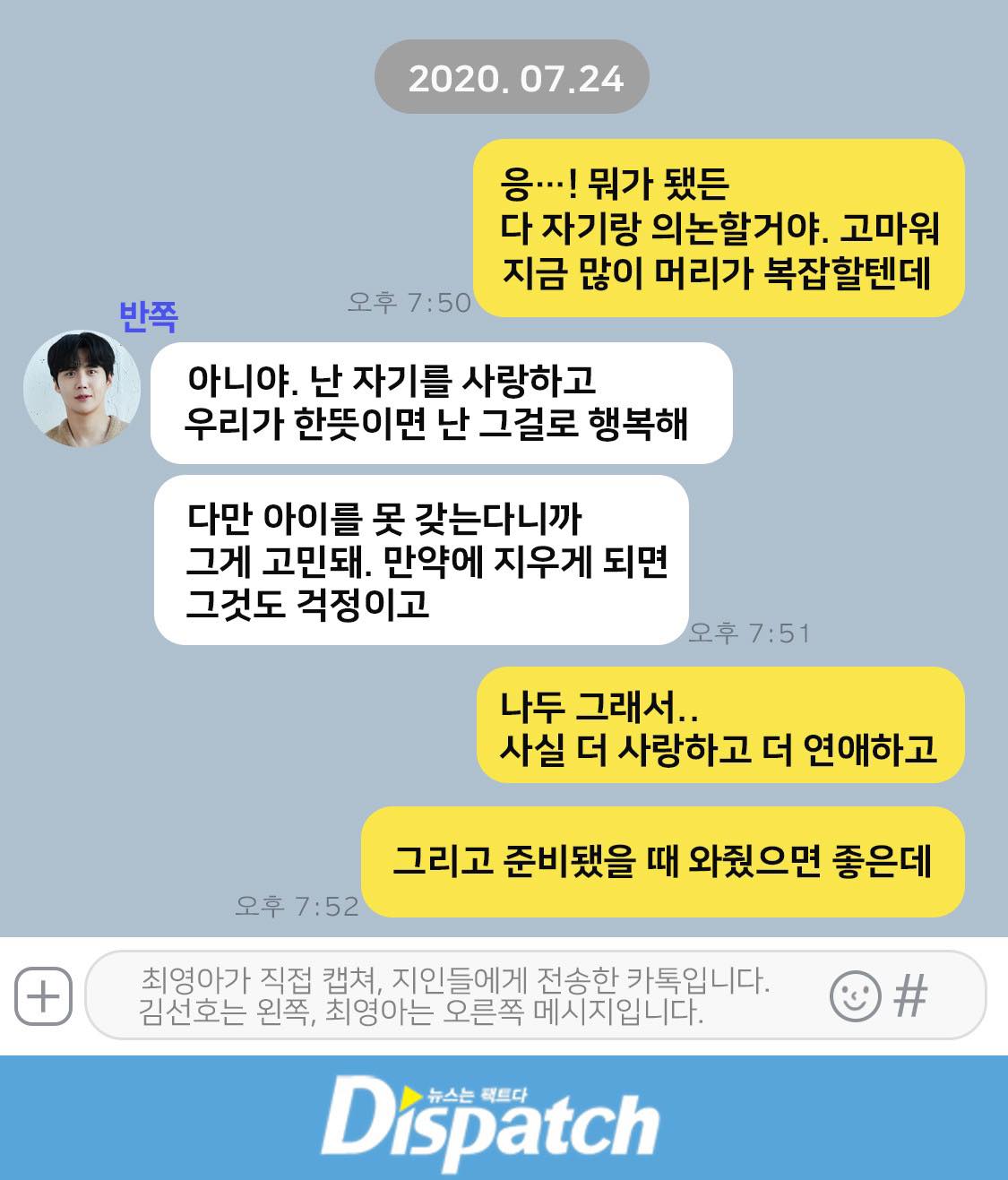 CYA: Okay! From now on, I’ll talk everything over with you, whatever it is.

CYA: Thank you… I know you probably have a lot to think about.

KSH: No problem. I love you.

KSH: And as long as we’re in this together, I’m happy.

KSH: I’m only worried because you might not be able to have children again.

KSH: And the abortion itself is a big deal, too.

CYA: Yeah, me too. That’s why I keep saying I wish we had more time to be in love…

CYA: …before the baby came. 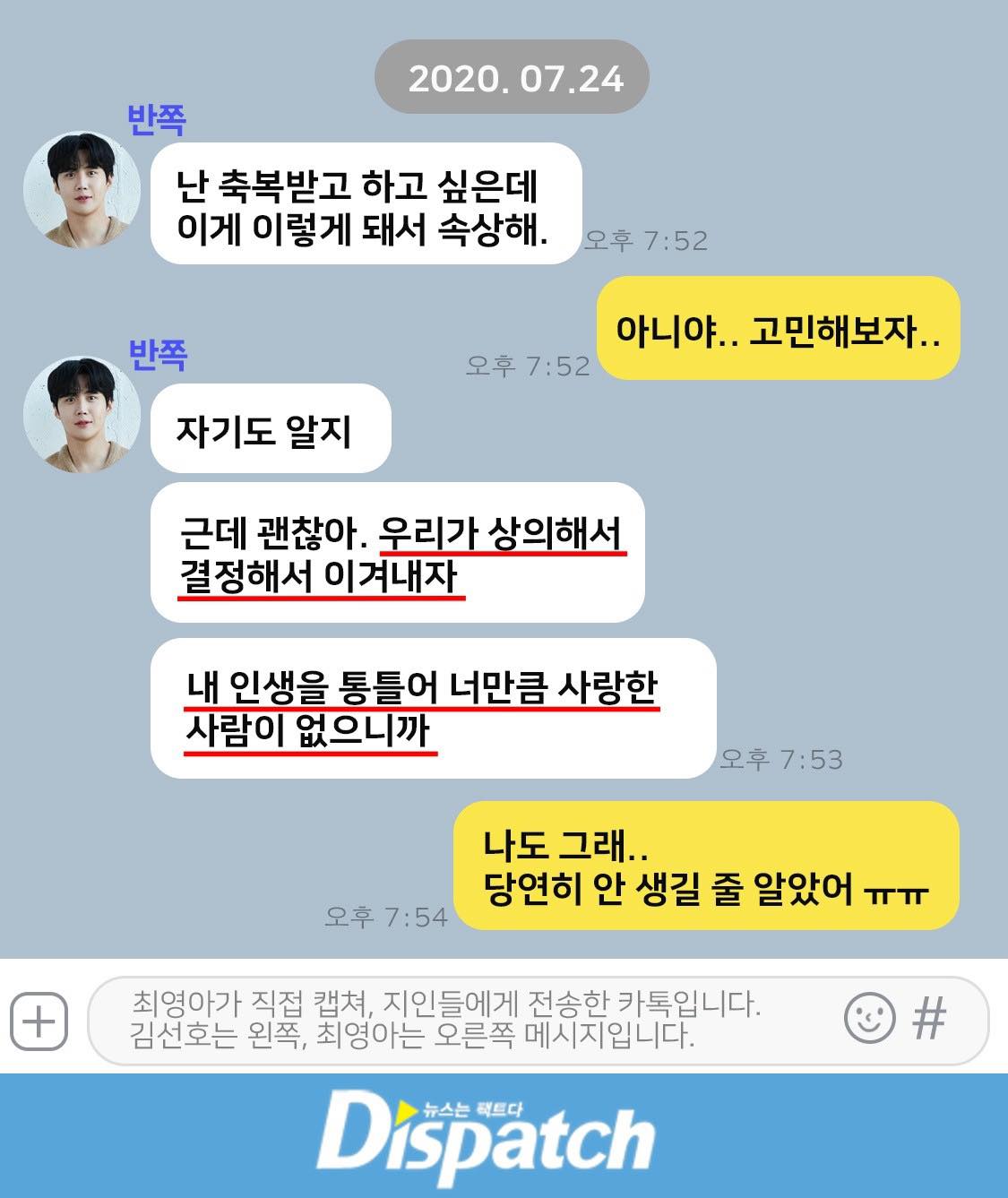 KSH: I want to be blessed. I want this to be a blessing for us. So I’m sad that this is how it has to be.

CYA: I know. Let’s keep thinking about it.

KSH: You know that, right?

KSH: Of course. We’ll be okay. We’ll get through it together.

KSH: I have never loved anyone in my life as much as I love you.

CYA: I feel the same way. I never expected to get pregnant, though.

Dispatch included that a friend of the ex-girlfriend’s shared that neither Kim Seon Ho nor Choi Young Ah had been mentally prepared for parenthood. 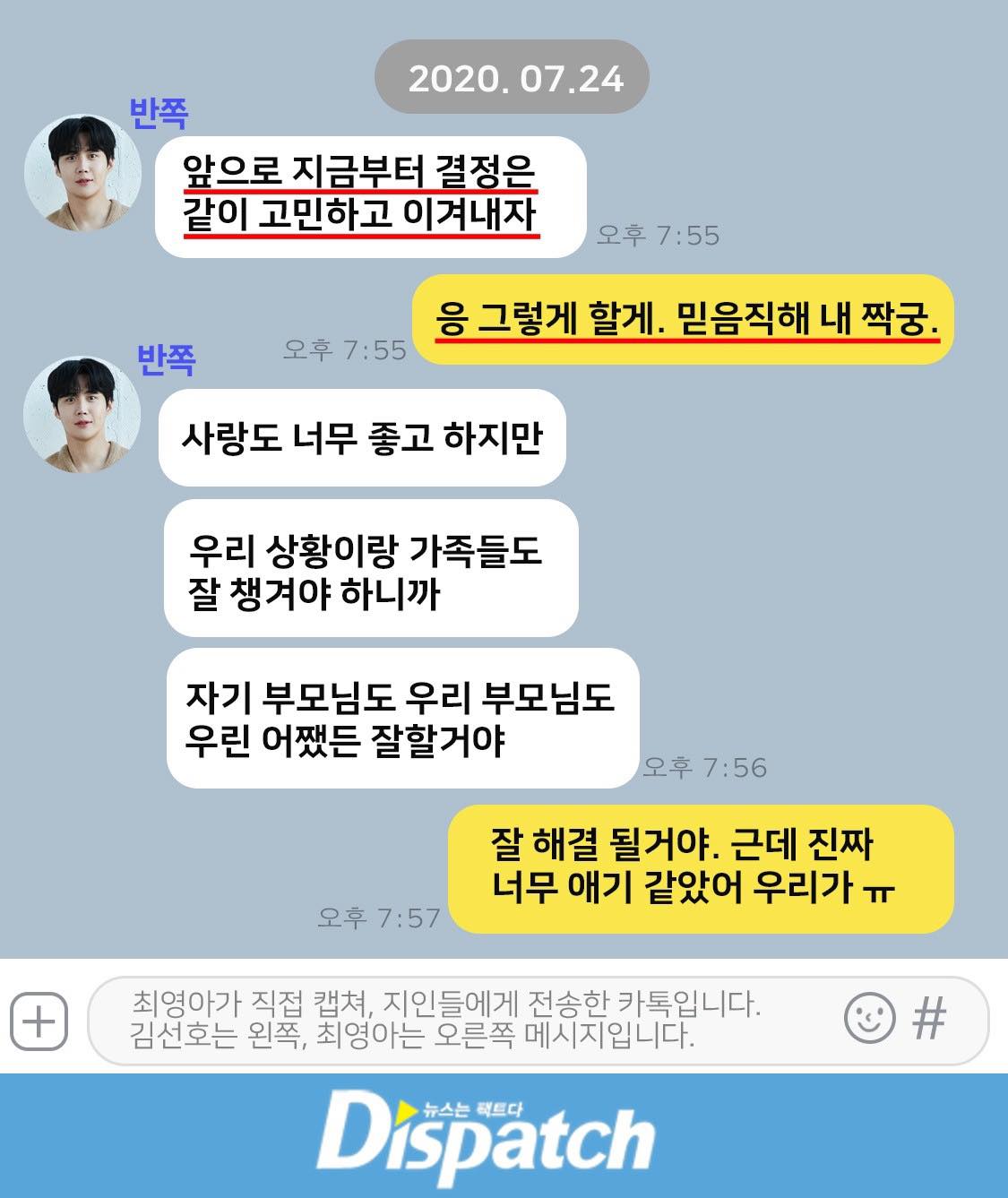 KSH: Going forward, we make all the decisions together and we get through this as one. Okay?

CYA: Okay. I trust you, my best friend.

CYA: No matter what happens… We’ll stay strong and we won’t hurt each other.

KSH: …but we also have to think about our current situations and our families. Right?

KSH: Both your parents and mine. But anyway, I know we can do this.

CYA: We can do this. I just can’t believe how [immature] we had been. 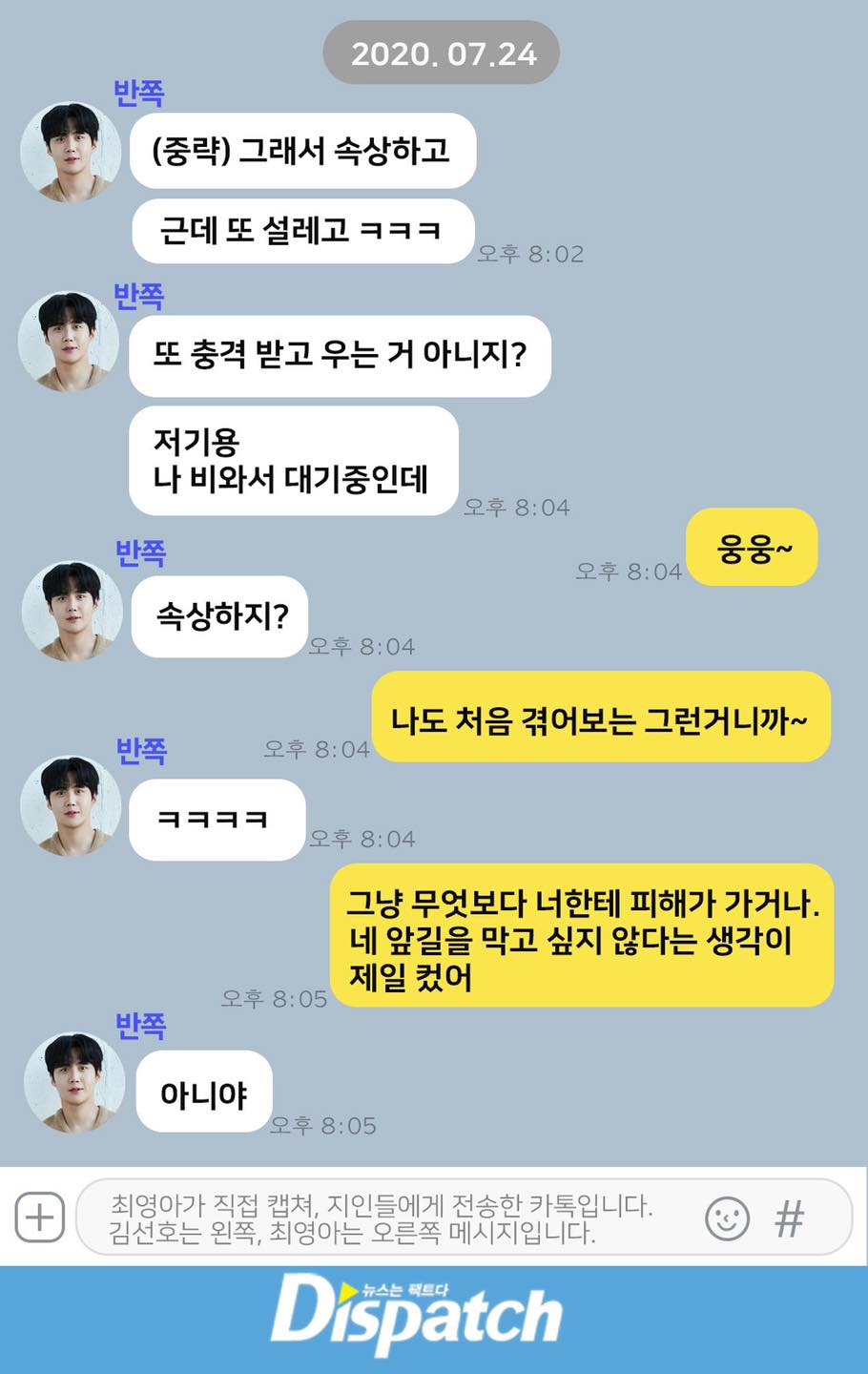 KSH: But at the same time, I’m excited for us.

KSH: I’m on standby because it started raining.

KSH: Are you okay? I bet you’re feeling down.

CYA: I really don’t want to be a burden to you. I can’t stop thinking about the fact that I might be getting in your way to success.

KSH: But you are not.

That being said, the KakaoTalk messages showed Kim Seon Ho trying to take responsibility, which—again—went against what Choi Young Ah insisted in her accusations.

KSH: I know this hasn’t been easy for you.

KSH: But I feel like you’re my person now.

CYA: I should be focusing on making money, too.

CYA: I didn’t expect this to happen. So I’m trying to figure out what I should be doing next.

CYA: It’s natural that we react this way. It’s not a bad thing.

KSH: I felt really happy, but… in a way.

KSH: Haha. We must be family already.

KSH: But seriously, babe. I do want to get married.

Regarding the ex-girlfriend’s claim that Kim Seon Ho threatened her with risking ₩900 million KRW (about $766,000 USD) in penalties, Dispatch then explained that while Kim Seon Ho did briefly worry about the financial loss that a scandal may cause, along with the potential loss of work that would follow, he immediately went back on his words and apologized for “being pathetic” like so.
.
KSH: I didn’t bring this up because it’s stupid.

KSH: But I do have movies I signed to take on.

KSH: So… if I back out on those, I will face financial loss. I can’t not think about that. Haha.

CYA: No, you’re not. You should be thinking about that.

KSH: But maybe it won’t matter.

KSH: That’s the only thing that worries me.

KSH: My parents will be surprised, but they’ll understand.

KSH: And… what if I have to stop acting?

KSH: I think that may be tough on me.

CYA: I don’t think we should take this on.

KSH: I’m not saying we shouldn’t take this on.

KSH: I’m just saying, in all honesty, I will feel that way [about my career].

CYA: And I don’t even like the idea of getting married because I’m pregnant.

CYA: I don’t want us to keep dating because you feel a sense of responsibility about us.

KSH: I just love acting, too. It will make me sad not to be able to keep acting.

KSH: Anyway, this is why I keep saying we need to be extremely careful with the decision. No regrets, right?

Even following the abortion, Kim Seon Ho remained affectionate toward the ex-girlfriend contrary to what had been accused of him. In his messages sent August 2020, he reassured Choi Young Ah again and again that he considers her as family.

KSH: I really, really love you.

KSH: You are one of my purposes in life.

KSH: I think of you as family.

KSH: And I’m so sorry I had been on the edge today.

KSH: I should have tried to understand you more.

CYA: Thanks for saying that.

KSH: But let’s help each other grow and mature together.

According to Dispatch, the two remained affectionate toward each other until the end of 2020. Right around Christmas, the ex-girlfriend sent pictures of her new luxury bag to Kim Seon Ho and showed off the bouquet of roses she received—assumingly from him too.

KSH: Hope your day hasn’t been too exhausting, bestie.

CYA: Can you take this weekend off? You’re the one who must be exhausted.

CYA: I’m done with my workout and out shopping for a bag.

CYA: It looks like a lunch box, doesn’t it? I meant to show you.

The card reads, “Believe in your value. You’re more special to me than anyone else.”
But in 2021, the relationship fell apart—Dispatch claimed, quoting a mutual friend’s comment about the couple.

And with a final screenshot from July 7, 2020, Dispatch backed up its previous coverage of Choi Young Ah’s lengthy apologetic text message and the claim that Kim Seon Ho eventually broke up with the ex-girlfriend not because of his “personality change,” but because of her complicated personal life.

CYA: Please, I’ll earn your trust back. I won’t ever lie to you again and I won’t hide anything from you either.

KSH: You’re a good person. You should date someone who deserves you. Let’s end things here. I don’t want to see you anymore.

CYA: I’m sorry I made you feel miserable.

KSH: Yeah. And I’m thankful that you told me the truth. I even understand where you’re coming from. But I just don’t think I can keep seeing you.

CYA: I only wanted to be good enough for you. I have always felt bad, and I’ve always thought I should stop lying to you… that I should stop being shady and tell you the truth. But I kept justifying myself.

CYA: Please give me another chance. I’m not a habitual liar. I can change.

KSH: This really breaks my heart, though. Remember when we had that fight about your lies? Only a while ago. You didn’t forget, did you?

KSH: It hasn’t been too long since you lied about something super small. I didn’t bring it up with you because it wasn’t a huge lie or anything… but tell me this. Am I supposed to understand my girlfriend lying to me to hang out with other men? Over and over again?

KSH: Did you even think about how torn I’d be if I heard about your lies through someone else? I even pretended to not know about them… until you came lying to my face again.

KSH: I told you when we first started dating that I’ll understand if you go clubbing with guys. I only wanted you to be honest with me and check in with me.

KSH: But on the day we promised to share a future together, you broke the promise again and shamelessly lied to my face.

CYA: I’m so sorry I made you feel that way… I really won’t ever lie to you again. I won’t ever stab you in the back, I promise.

KSH: Young Ah, please. There is no future for us anymore.

Readers are welcome to give their fair share of both, however lovekpop95 found that Kim Seon Ho in this case acted skillfully, proving that he did not want her to abort the pregnancy.