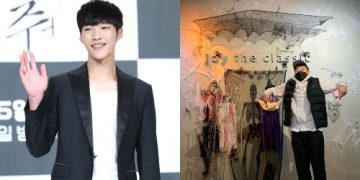 On October 31, actor Woo Do Hwan took to his Instagram to inform fans of his comeback. Along with pictures of himself in front of the wall decorated for Halloween, he wrote, “I miss you all so much. Eat a lot of candy.”

Actor ‘The King: Eternal Monarch’ Woo Do Hwan is about to say goodbye his fans to enlisted !

Immediately fans as well as Woo Do Hwan’s Famous Friends commented on the post to welcome him back.

CNBLUE’s Lee Jung Shin commented, “Wow… You’re back” with a heart emoji. AOA’s Seolhyun wrote, “Wow” and a string of emojis, while Shin Jae Ha said, “Are you discharged??? Really???”

#WooDoHwan is back to IG! FINALLY AN UPDATE AFTER ALMOST 1 YEAR! 😍

Soon after, Woo Do Hwan’s agency KeyEast Entertainment revealed, “Woo Do Hwan is currently on his final leave from the military. He will be discharged on January 5 next year without returning to the army base.”