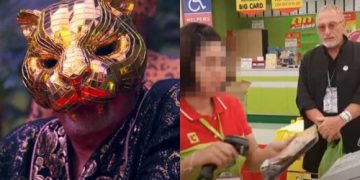 American actor Geoffrey Giuliano, who played the VIP Four in the hit TV series ‘Squid Game’ is being criticized for his past rude behavior.

According to reports that are going viral, the American actor was in Thailand in August 2017 and was rude to a cashier at the market. In the video, Geoffrey Giuliano can be seen insulting and cursing another customer at Big-C supermarket in Pattaya, Thailand.

The individual recording the video explained the situation and said, “He appeared from nowhere and cut in line in front of me. This was a cashier for customers with 10 or fewer items but he threw 25 items on the conveyer belt.”

With ‘Squid Game’ gaining much popularity and the actors garnering more attention than ever, this incident from 2017 had resurfaced, showing Geoffrey’s past rude actions. Netizens who saw the clip commented, “Does being American allow you to cut other people in line?” “That’s so rude,” “How it this guy an actor?” “He’s a typical white supremacist and thinks America is better than everyone else,” “No wonder they hired him, he was perfect for the role,” and “He’s the same person from the drama, lol, he acts just like the VIPs in real-life.”