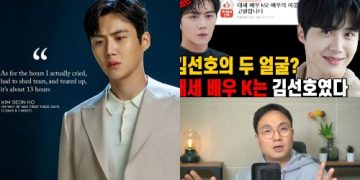 Lee Jin Ho, reporter and owner of a YouTube channel specializing in showbiz news with more than 300,000 subscribers frankly: “Actor K suspected of forcing his ex-girlfriend to have an abortion is none other than Kim Seon Ho.”

Referring to Kim Sun Ho’s management company, Salt Entertainment, Lee Jin Ho said that this company has a reputation for being quite friendly. However, today they suddenly cut off all communication with the media to protect Kim Seon Ho. Previously, even when the actor won the Brand award, the company also cleverly removed the complement “Entertainment” in the name of the award to PR for the their actor.

Kim Seon Ho originally had an interview scheduled for October 20 to celebrate the end of the drama “Hometown Cha-Cha-Cha”, but in this situation it seems that it is not easy for the interview to go smoothly.

Besides, reporter Lee said, “Some Korean media since September have reported that Kim Seon Ho is having trouble with his ex-girlfriend. This content matches the description of A (the accuser)”. That’s why reporter Lee did not hesitate to directly name Kim Sun Ho as the male lead in the scandal.

Reporter Lee also mentioned that while the management company kept quiet, Kim Seon Ho’s fans were trying to calm down under his latest Insta post to wash away the negative comments.