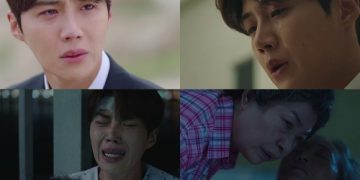 Without denying Kang Do Ha’s accusations, Doo Sik (Kim Seon Ho) admits everything is true to Hye Jin (Shin Min Ah), even saying that he killed the man in the photo. that Hye Jin saw at the beginning of episode 15 of Hometown Cha-Cha-Cha. After that, Doo Sik locked himself in the house, Gongjin village was in chaos because of the lack of the patriarch, and Hye Jin was extremely confused and miserable, not knowing what was happening to her.

Sung Hyun asked Do Ha about the past and learned that Doo Sik once asked Do Ha’s father to invest in a fund that Doo Sik manages. Because the company made a loss, that fund was also destroyed, Do Ha’s father lost all his wealth, thought about it, and committed suicide. Do Ha also mentioned about a superior who died in a traffic accident of Doo Sik, which made Sung Hyun immediately think that it was his brother-in-law.

With just one episode left in its run, the romantic comedy starring Kim Seon Ho and Shin Min Ah remains as popular as ever. According to Nielsen Korea, the penultimate episode of “Hometown Cha-Cha-Cha” scored an average quality rating of 10.3 percent on October 16, marking the highest viewership ratings the drama has ever achieved on a Saturday.

“Hometown Cha-Cha-Cha” also took first place in its time slot across all channels—including public broadcast networks—among the key demographic of viewers ages to 49, with whom it scored an average of 5.2 percent.