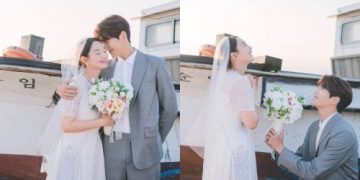 Episode 16 of the series Hometown Cha-Cha-Cha was broadcast on the evening of October 17. This is also the ending episode of Hometown Cha-Cha-Cha, different from netizens’ predictions that the drama will have a sad ending, the final episode of the main character couple is played by Shin Min Ah and Kim Seon Ho. had a happy ending, they were together after many difficulties.

Immediately many netizens asked the producer to continue it with season 2.

Pola Mapesos
“Season 2, please! I will miss the halmeonisles and the sceneries of Pohang! One delightful,healing drama.”

“Omg…this drama is just!!!🥰🥰🥰 I’m falling in love with Kim seon ho and shin min ah even more!! I can’t behold myself anymore😅 their chemistry is soo cute and real at the same time!! No wonder hometown cha cha cha has become the talk of the town because of its amazing screenplay, dialogue, and the actors ofc u already know…our dimple king and queen have literally given their best to this drama..👏👏👏
Shin min ah is my favorite korean actress and I’m proud of my girl!!!❤️💜
Those who like rom com cum some modern relationship goals in a cool hometown with a beach and surfing 🌊 like adventures definitely give it a go✊
Thank u for reading my review have a good day!
Hope it gets a season 2.”

“I beg for season 2 to continue in production.
This has to be one of my favorite dramas, because:

0) I love the main leads so much – they have amazing chemistry.

1) Sometimes the “girl ends up with the rude guy with no emotions of the second-lead who is openly kind and compassionate, instead storyline gets a bit tiring so it’s refreshing to both the main and second-lead guys are good guys show it, and the female lead speaks her mind (although sometimes is insensitive).

2) It’s even kinda woke – at one point Hye-jin says, “so you’re going to blame the victim instead of the attacker?”, “that’s an old-fashioned view, men and women can be just friends”, ” divorce isn’t a bad thing”, Du-shik says “I know you wear those workout clothes to have a good workout and not to show skin”

3) Most of the humour is really funny. The actors do a great job, especially Seon-ho.

4) The setting is so refreshing – the beach, the sunlight! The homey vibe of the drama is a great escape.

5) It’s not as predictable as other dramas, and makes you wonder about people’s backstories.”