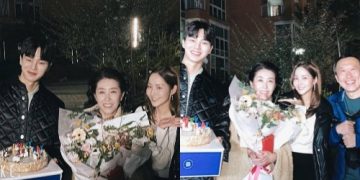 Kim Mi Kyung with #SongKang and #ParkMinyoung at the filming set of #OfficeRomanceCruelty! They surprised her last night on her birthday 🥺💛 pic.twitter.com/GBP6nDHqse

It can be seen that Kim Mi Kyung was really happy when her colleagues and juniors congratulated her on her birthday.
Currently Song Kang, Park Min young and Kim Mi Kyung are filming the movie Office Romance Cruelty together

Office Romance Cruelty is a workplace romance drama depicting the work and love of people at the Korea Meteorological Administration, Korea’s national weather forecast service. It is the first drama to be set in the background of an unknown space, the Korea Meteorological Administration, as it is impossible to know the kind of people and how they work, although it is a place that tells the weather that is most closely connected with daily life.

Park Min Young plays Jin Ha Kyung, the general forecaster of Division 2 of the Korea Meteorological Administration, who is an intelligent and highly organized individual and does everything by the book. She is fastidious about keeping her personal and professional lives separate, often being the outsider at the workplace, by choice.

Song Kang takes on the role of Lee Si Woo, who is in charge of the special report at Division 2 of the Korea Meteorological Administration. Although clumsy, he boasts an impressive IQ of 150 and is able to achieve anything once he sets his mind to it. However, in spite of his intelligence and abilities, all he cares about is the weather.