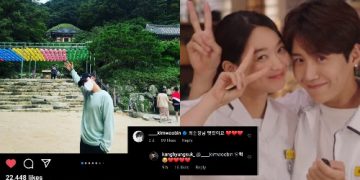 Kim Woo Bin and Shin Min Ah are an extremely special couple, they have a beautiful and romantic love. Therefore, it is very normal for the couple to support each other in drama projects.
Recently, fans have discovered evidence that actor Kim Woo Bin is always watching the movie ‘Hometown ChaChaCha’ by his girlfriend Shin Min Ah with actor Kim Seon Ho.

Specifically, netizens discovered that he wrote a comment on Instagram under the latest post of actor Kang Hyung Suk, who is playing the role of police officer Choi Eun Cheol in ‘Hometown ChaChaCha’.

He must have watched #HometownChaChaCha”