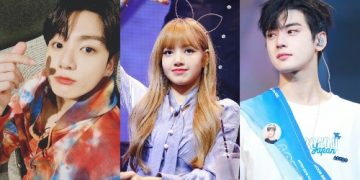 IDN Times listed the 12 K-Pop Idols who have the most fans or are everyone’s bias in Indonesian. The article writes: “When asked who is your bias, usually these are the names.”

MEDIA | Jungkook is ranked #1 as the K-Pop Idol with the most biased fans. He has the most fans among K-Pop Idols. pic.twitter.com/zTVmCEx7vW

“The first is of course BTS Jungkook whose popularity is currently not only limited to Korea but throughout the world. Jungkook is popular globally for his vocals, visuals, and talents.”

Jungkook is listed #1 in the list of the 12 K-pop idols who are everyone's bias.
"When asked who is your bias, usually these are the names". pic.twitter.com/nY3WHpG0uo

ASTRO’s Cha Eun Woo, who is very famous for his visuals, took 2nd place, followed by Seventeen’s Mingyu and NCT’s Taeyong. BLACKPINK’s Lisa was the highest female idol on the list, ranking in at number 7.