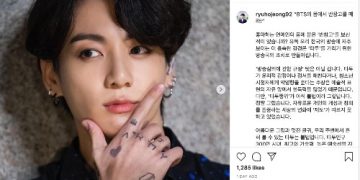 A South Korean politician has been criticised by BTS fans for using images of member Jungkook to promote her new bill.

Ryu Ho-jeong, a member of the National Assembly of South Korea, recently took to social media to announce that she would be drafting a new bill in order to liberalise tattooing in the East Asian country. Currently, tattoos are not illegal in South Korea, but “must be done by a medical professional”, as noted by Korea JoongAng Daily.

“Take the tape off of BTS,” Ryu wrote on her social media accounts, alongside images of BTS member Jungkook using tape and cloth to cover tattoos on his arms and hands. “Have you ever seen tape on your favourite celebrity’s body?” she asked, as translated by the Korea JoongAng Daily. 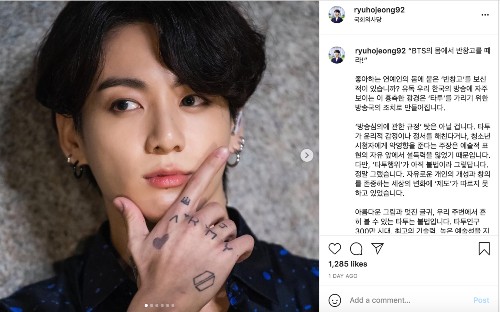 “This is a hideous sight, which is often seen on Korean television as it is the rules of the broadcasters not to expose tattoos,” she added. The news outlet also noted that the country’s media regulation agency Korea Communications Commissions also has rules that required shows to blur tattoos on shows, while artists “will often cover them with tape [or cloth]”.

“Beautiful paintings and wonderful words from tattoos that are common around us are illegal in Korea,” she continued, as translated by Koreaboo. “Korea has over three million people with tattoos, and tattoos have been deemed as high artistry across the world. Even domestic tattooists are revered as outstanding artists on the world stage but Korea [has] ignored them.”

However, some BTS fans have taken offence to her usage of Jungkook’s images as an example, saying that she is “using the popular K-pop artist for politics”, as Korea JoongAng Daily noted. Fans have also asked BTS’ agency Big Hit Music to “do something to protect their artist”.