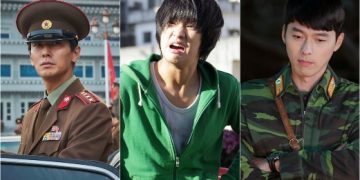 Top 5 Korean Male Actors Who Successfully Played North Korean Soldier Roles!!
One of the popular Korean movie genres is probably those that include North Korean issues. Little known to the South Korean public, North Korea is a popular yet interesting topic many movie producers use to make their movies mysterious and interesting. North Korea and South Korea share similar yet different languages, cultures, and other features. Such differences make it very challenging for actors to perfectly fit themselves into characters from North Korea. However, we all know those who have done it successfully.

9 Korean Actor with Most Followers on Instagram (Updated September 2021)

Hyun Bin as Ri Junghyuk in ‘Crash Landing on You’

Joo Jihoon as Head Jung in ‘The Spy Gone North’