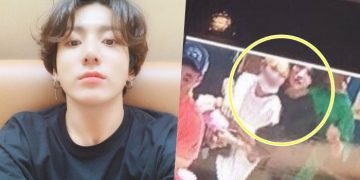 BTS star Jungkook is currently single.
According to various reports online, Jungkook’s ideal woman is someone who’s at least 168cm but smaller than him, is a good wife, good at cooking, smart, has pretty legs, is nice and is good at singing.

In terms of actual girlfriends, Jungkook is currently single but has previously been rumoured to date K-pop stars Jeong Ye In of the group ‘Lovelyz’, Jung Chae Yeon from ‘DIA’ as well as a 2015 rumour that he dated CUBE trainee Ko So-hyun.

Rumours that fans had found an Instagram account that proved Jungkook and Ko So-hyun had dated and included their nicknames Cookie and Mochi continued to flood the internet, but neither have ever spoken publicly about the stories.