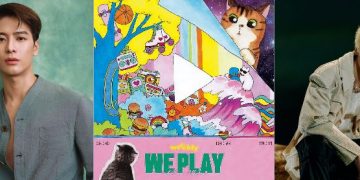 They’re all gifted when it comes to talent

Kpop Idols are known for having skills in singing, dancing , rapping and more but one thing we should know is that some of our favorite idols are also good when it comes to drawing. Surprisingly there are some idols who design their own album covers using their talent in drawing. These six idols are just gifted for having the talent for drawing, keep on reading to see who’s included in our list!

GOT 7’s Jackson Wang drew his own album cover which is also his first artwork for his debut studio album “Mirrors” in 2019 ,

Fans believe that Hyunjin is the one who drew the cover art for Stray Kids recent digital album ‘Mixtape:OH’.

SHINee’s Key was the one of the earliest idols to draw his group album cover artwork. Back in 2013 , he painted the unique and brightly colored cover for “The Misconception of Us”

Back in 2020, PENTAGON’s Kino revealed that he drew the digital album cover artwork for “WE:TH”. He even shared that the daisy he painted, which originally had a pink background, was a gift for Hui ahead of his enlistment in the military.

Another recent album cover on this list is Weeekly’s WE PLAY, drawn by Jiyoon.The cover artwork features a whole host of bright and adorable objects, from burgers to roller skates to a cat in space. Jiyoon also shares that the image took her a whole week to draw, but she was proud when she saw the final result.

The cover for GWSN’s ‘The Keys’ may look like a professional stock graphic, but it was actually illustrated by Miya.The ornate drawing truly shows Miya’s technical skill as an artist as well as her eye for beauty.